"A value-neutral government is impossible. The central battle in our country today is about values and how we understand freedom. It is a battle for our very soul."
-Star Parker 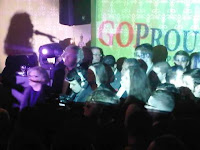 CPAC stands for Conservative Political Action Conference, which was formed in 1973 by Young Americans for Freedom and the American Conservatives Union. CPAC is particularly attractive to younger conservatives, with about half the attendees of college age over the years, according to reports.

CPAC has been of virtually no use in its yearly straw polls, particularly of late when Ron Paul supporters pack the place and throw the polls to Paul who does abysmally nationwide in real voting. Mostly it serves as a place for conservative voices to be heard when otherwise they tend to be ignored by the press, a place for Ann Coulter to say things that get media attention so she can sell her latest book, and for conservatives to get pumped up and feel less alone (particularly a concern at colleges and universities). Like all of these political gatherings, its more about how you feel important and part of something important and big than any tangible results.

Lately though, the direction of CPAC has been changing. Originally a mainstream conservative gathering with diversity of opinion from Newt Gingrich to Pat Buchanan, the tilt has been more toward libertarianism over the last few years. True conservatism is conservative both fiscally and socially; if you move to the left socially, you enter libertarian territory. Presently libertarians and conservatives are fairly friendly and work together but in 2008 the split was more visible.

Then, the arguments between supporters of candidates like Giuliani (pretty much a leftist on social issues) and Romney (more conservative socially) burned hot before the election. Previous to that election, Libertarians and Conservatives had a common enemy: radical Islam who attacked America. After that, they gained another: a radical leftist academic president and congress. The Tea Party movement was largely driven by fiscal and constitutional issues, not social ones (although the ones I attended had plenty of signs and people concerned with social issues).

The last two CPAC gatherings have been controversial because of homosexual topics and issues. The ACLU was invited once, and GOProud has been a cosponsor and significant participant for two years now. These groups may be fiscally conservative at times, but are socially leftist. In other words, CPAC is leaning more and more toward libertarianism than conservatism. CPAC is becoming LPAC - the Libertarian Political Action Conference.
I've argued several times in the past that libertarianism - shorn of its more radical positions - is the future of American politics, that the first party to successfully embrace libertarian ideals would be the one to triumph for the forseeable future in elections. That's what the Republican Party appears to be doing at present, while the Democratic Party is stuck in the hands of dinosaur tax and spend leftists from the 60's era like Representative Pelosi (D-CA) and House Majority Leader Reid (D-NV).

However, what is politically successful and effective may not be right or a good idea. And abandoning one portion of conservatism to embrace another may not work. In this case I think that social "progressivism" is destructive to society and culture as we can plainly see around us, and that fiscal conservatism is a necessary and inevitable result of social conservatism; that the latter is created by and organically a result of the former. Star Parker puts it this way:

I thought I was doing OK in my previous life -- scamming the welfare system, going to the beach, soaking in my welfare-subsidized hot tub, treating sex as a hobby, and abortion as birth control.

In our culture today that views material prosperity as the ultimate barometer of success, the truth is becoming unfortunately lost that the evil man can prosper. And if there is nothing more than what is before our eyes in this world, what does it matter?

When I understood how the culture of welfare state materialism was destroying not just my life, but all of black America, there was no dividing line in my mind between "social issues" and "economic issues." The only dividing line I saw was between right and wrong, good and evil.

It is the basic principles of social conservatism that result in fiscal conervatism, and abandoning the first means an inevitable erosion of the second. Without the foundation of personal responsibility, ethics, and integrity, the higher stories of fiscal and foreign policy conservatism eventually rot away and collapse under the weight of hedonism, narcissism, and neoteny, where a culture never really grows up.

It takes the desire and understanding that we have to give some to gain much, that we have to work hard to be able to play ever, and that we have to restrain ourselves to have any liberty for a culture to survive. Abandoning these basic social principles means that we abandon the framework which builds fiscal restraint. You can't make the hard choices if your entire worldview is centered on what makes me happy and people leaving me alone to have as much fun as I can stand. You cannot practice what you do not beleive. Eventually what you do becomes what you live for and believe in unless it has a strong, disciplined basis. Like a marriage based on how someone makes you feel and on that intoxicating feeling of infatuation, when the good stuff goes away, so does the marriage.

So CPAC, whatever purpose it once served, has offered up its heritage on the altar of pragmatism: this will work to gain power so who cares? And in the end, we'll all lose. I recognize that my social conservatism isn't fashionable or hip; it never has been. What matters is whether or not its right. And that's what CPAC appears to not want to even consider.

*UPDATE: Here's a bit from Rush Limbaugh yesterday describing the changes at CPAC:

I wasn't there, so I can't say what the mood was like, all I can comment on is what others have said, the public statements, and what we've been shown by CPAC its self in publicity. But I can't help noticing the same thing that Rush did. Rush attributes it to mainstream beltway Republicans trying to use CPAC to "circle the wagons" but I don't think CPAC likes or gets any directions from the GOP. I think its libertarian influence primarily through the younger people.
Posted by Christopher R Taylor at 9:02 AM