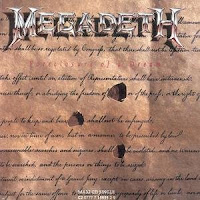 *This is a repost from about a year ago because I listened to the song again and wanted to restate the complaint and annoyance I had. Where are the songs about economic misery today, after almost 3 years of 10% unemployment, record welfare and food stamp rolls, and record home foreclosures?

Megadeth was made by Dave Mustaine after he was thrown out of the band Metallica for his uncontrolled drug and alcohol use which was damaging his musical performance. Over time he cleaned up his act and proved a brilliant and skilled musician, and at this point Megadeth tends to put out better stuff than Metallica (although Death Magnetic was pretty good).

The album Countdown to Extinction came out in 1992 and marked the start of a new fan base for Megadeth. Already loved by thrash metal and hard rock fans, the new album was more radio- and MTV-friendly, with shorter and more polished songs which launched the band into stardom with hits like "Symphony of Destruction."

This was the album which had the song "Foreclosure of a Dream," which decries the financial situation and looks at the political situation in America. Written by Dave Mustaine and David Ellefson, the song has a soundbite from George Bush the Elder saying "they'll push me again and I'll say read my lips, no new taxes" repeated in it during the guitar solos. Like other 80s songs such as "Money's Too Tight To Mention," "Allentown," and "Born in The USA" this one portrayed life as unbearably horrible when it wasn't.

Yet if you read the lyrics you find that they fit today's situation far, far better than the brief recession of 1992 which ended even early that year, before most of the primary elections had even been held. Here's the first verse:

Again he's overstating the effects, as not that many farms were lost and the nation wasn't demolished, but that's how it can feel when it happens to you. And then there's the next verse which contains a few words you might find familiar:
Now with new hope some will be proud
This is no hoax, no one pushed out
Receive a reprieve and be a pioneer
Break new ground of a new frontier
New ideas will surely get by
No deed, or dividend. Some may ask "Why?"
You'll find the solution, the answers in the sky
Hope and change, and answers in the sky? Yes, and even more debt. The song seems to me to think that President Clinton's election will make everything great again with lines like "this is no hoax" and "new ideas will surely get by" but as time revealed, the hope was a lie and the new ideas were in fact very old, very failed, and very bad. History has a tendency to repeat its self, and today the foreclosure of a dream is upon us again.

When the nation puts its self into debt that increases monthly as the Democrats in congress pass ever more gargantuan spending bills, eventually that bill will come due.

One last thought: why would someone who voted for President Clinton care if congress raised taxes? President Bush promised strenuously not to raise taxes, but eventually signed a fee increase into law, which frustrated a lot on the right, but why does the left think that's so significant or awful? They like tax increases. And they certainly seem to have no problems with broken promises....
Posted by Christopher R Taylor at 7:44 AM