A CERTAIN FAILURE TO LEAD

"I'll wager any complaining school board official will be a registered Republican." 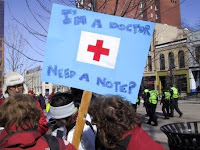 When it was revealed that doctors from the University of Wisconsin, were going to teacher protests and offering to write up notes for the protesters, the initial response of the left was to claim it was a right-wing lie. In time, everyone began to realize these events were real, driven by the fact that teachers could not take the time off to protest or go on strike by contract unless they were given a physician's note explaining medical reasons for their absence.

It appears that the University is going to investigate these doctors, but since they are all faculty and leadership at the university it isn't clear that anything will come of the efforts. As Ford Vox writes at the Atlantic in a piece otherwise breathlessly supportive of the unions:

After viewing the videos at my request last night, Dr. Arthur Derse called me up exclaiming, "Holy mackerel! It's much worse than it looked in the paper. I'm stunned, absolutely stunned." Dr. Derse is the Director of Center for Bioethics and Medical Humanities a the Medical College of Wisconsin. "When all's said and done, it's really the profession of medicine that has the black eye in this case," he says.

There is no question these doctors are masking political opinion in the white coat of the medical profession, Dr. Derse believes. "The videos are pretty damning."

Yet this problem goes beyond the medical profession. Certainly doctors look pretty bad here, as these were clearly willing to lie and distort their profession, violating ethics if it benefits their politics, but they are not alone here.

Teachers are showing little ethical backbone as well. How often has a teacher had to question or deny a child's note from a doctor when its plainly false? How many times have teachers had a fake note handed to them and had to call the student on it? What is their language, what do they tell the student then? Its bad to lie, you shouldn't try to defraud the system, this hurts people who really are sick, its bad for you to miss school. Yet what have these teachers just done, except exactly what they condemn students for trying and teach them not to do? What example are these teachers setting for their students, except that its right to lie if you think you'll gain by it?

Education, we're told, is critical for students, that the future of the nation and our world rests in the hands of students who must have the best. Teachers should be paid more because of the immense burden they carry, and how important it is for them to educate these young minds for our future. Its all for the children, we're told. Yet what have these teachers done by taking off time from school merely to advance their political cause?

I understand these teachers are upset that they have to take an effective pay cut by paying into their pensions and health care when it was previously free. I get that they're afraid this is an attempt to break their union, or as Ford Vox puts it:

Fears over becoming hostage to soaring health insurance premiums has Wisconsin's teachers and other public employees protesting in downtown Madison for the second week running. It's a very real threat to their economic stability, one they'll be ill-equipped to tackle without the unionizing rights proposed legislation would deny them.

The fact that this legislation does nothing to damage unions or attack their rights is irrelevant, that's what the fear is, that's what the unions are telling them. So I understand their fears and what motivated them.

The question I have is what are they teaching their students by their actions? How important is education truly to these teachers if they take day after day off to march around with signs and yell about pay? How seriously should their students take their alleged dedication to education and the future? If the children are so very important that we all should sacrifice and education is so critical that all kids should be compelled by government to attend some form of school, what are we to make of teachers who blow off school - using fake doctor's notes - to protest about a small change in pay?

In the end, all that rhetoric about the students and all that talk about the future and education was just that: talk. When it comes down to what really matters, these teachers made their statement loud and clear with their actions: what matters is their pocketbook and the safety of their union.
Posted by Christopher R Taylor at 9:38 AM