"I want my MTV"
Oregon's cyclists are grumbling about a bill introduced to the state legislature. Representative Mitch Greenlick (D) of Portland has proposed a bill which would ban any children under the age of 6 from being allowed on a bicycle or trailer. That means no kiddies pulled behind the bike or on a special basket. Because parents can't be trusted to have judgment and there's a huge rash of fatalities from cycling tykes. Well, not really but its a pressing issue to this guy.

Not to be outdone in the silly law area, Washington State is working on creating a new business license. Sponsored by a Democrat and a Republican, it would require hair designers to be licensed. After all, you can't let just anyone design hair styles! You might end up with people looking like this: 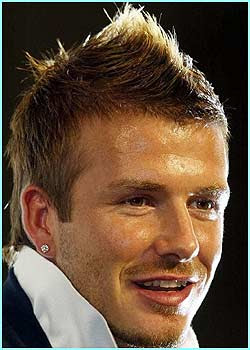 Now its up to 27 states with official legal challenges to the Government Health Insurance Takeover Act. Its already been overturned in one house of congress, maybe people just don't like that bill and it never should have passed to begin with.

Folks who think that disasters and radical weather is getting worse or peaked in the 20th century are lacking in history. At Futurepundit, Randall Parker has some useful history lessons about the 19th century, which included:
In all it was far worse in terms of violent and catastrophic natural events than the 20th century, it just is less known, the areas less populated (the New Madrid earthquake, for example, would make Hurricane Katrina look like a rainbow), and the publicity less hysterical.

Its almost as if Obama didn't deserve the prize or something.
Speaking of President Obama, his administration is still trying to get Honduras to accept Zelaya back into the country. Before the Honduran government hurled the would-be dictator for life out of power, few had even heard of Zelaya, but I suspect President Obama and his team of academic intellectual types were well aware of not just him but dozens of "revolutionaries" and leftist leaders they want to support and help around the world. I wonder what they're doing for these guys we don't know about?

Nutrition labeling is very common in the US, you can hardly buy anything edible or drinkable without some kind of content labeling (other than "food supplements" like bee pollen). One exception: liquor. Beer companies are try to market their beer as healthier somehow by claiming it has fewer calories and so on, but now the Federal Tax and Trade Bureau which handles liquor labeling is looking to require nutritional labeling on booze. Because people who drink booze care about how much vitamin A they're getting.

Often when conservatives argue that the government needs to be cut to shrink it to proper size and get rid of waste, some leftist will pipe up with "well what should be cut, huh? huh?" There are always good suggestions - and these days few conservatives consider the military a sacred cow like we once did - but Dick Armey and Matt Kibbe have gone further, listing over a trillion and a half dollars of savings that could and should be done.

Speaking of specific cuts and naming names, Jane Jamison at Right Wing News did the same thing for the State of California, listing scores of government agencies that are wasteful, absurd, outdated, or just insane that California spends billions on. Its a huge, huge list, and even if half of them were kept there would be significant savings.

Unions fought hard in the 20th century for legislation to make union votes private and secret so companies couldn't pressure or punish workers for trying to unionize. Now they want to get rid of that because they're on the strong side but losing workers and need that ability to pressure and intimidate to win votes. There's no chance a bill of that kind can pass this congress, but states are passing legislation to replace the federal law just in case the next one tries again. Now the Obama administration is threatening to sue states who dare to disagree with unions on this topic.

And finally, Dire Straits is offensive and must be banned. So says the Canadian Broadcast Standards Council (CBSC). Their problem is with the song "Money For Nothing" which, while not their best song was their most popular and it contains the phrase "The little faggot with the earring and the make up, yeah buddy, that's his own hair." Mind you that's mocking someone who'd have that attitude, but the truth is, lots of songs have lots of words that people find offensive (most of hip hop and rap, for instance). The broadcast council isn't a government agency, its more like an industry broadcast oversight group which suggests what radio stations should do. In response, at least one station is playing "Money For Nothing" over and over all day today. I onder what the CBSC thinks of The Pogues' "Fairytale of New York." Mark Knopfler explains the song this way:

Apart from the fact that there are stupid gay people as well as stupid other people, it suggests that maybe you can't let it have so many meanings - you have to be direct.

In fact, I'm still in two minds as to whether it's a good idea to write songs that aren't in the first person, to take on other characters.

The singer in 'Money for Nothing' is a real ignoramus, hard hat mentality - somebody who sees everything in financial terms.

I mean, this guy has a grudging respect for rock stars. He sees it in terms of, well, that's not working and yet the guys rich: that's a good scam.Yeah well, some groups are sacred, Mark.

The deal about Oregon is pretty hysterical. The people in the left cost are drowning themselves in liberal regulations. Pretty soon parents will be limited on the amount of ice cream cones they ban buy their kids per summer. Isn't Michele already on that?

There were three problems with Katrina. A. The worthless people who live there. B. The worthless democrat politicians who totally represent their constituents. C. The enviro-nuts (Sierra Club etc.) that stopped the levee reenforcements.

Watched IFC's new comedy "Portlandia" this weekend, and was thinking about the bike laws you mentioned above. The new show is pretty funny stuff. It's all in good humor, but they freaking skewer the far left sensibilities of hippie cities (could just as easily have been set in Austin, San Fran, Seattle, or Boulder). The tagline was, "Portland, where the dream of the 90's is still alive... it's like the Bush Administration never happened!"

Great show, and along with ABC's short lived (but hilarious) animated comedy "The Goode Family"
from 2009, I think it is a good sign that the far left is starting to (FINALLY!) recieve some cultural backlash for being, well, ridiculous.