"Oversimplification diminishes the perceived importance of a message." 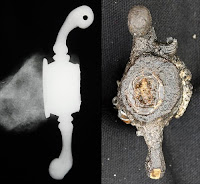 It's tough to tell from reading blogs and the news lately, but other things happened than the Arizona shootings this week. I'll touch on that in this wrap up but not very much.

Scientists have been studying fonts and how they relate to memory. What they have found is that it seems to be true that more challenging fonts to read are more likely to stick in your memory. Its as if when your brain has to work harder at comprehension, its more likely to store the data. They are suggesting that it is possible that E-Readers, by using the most easy to read and comfortable fonts (such as Kindle's Caecilia font) might lead to less reading comprehension and storage than other fonts. Personally I like the Perpetua font as it looks sort of old fashioned but its not as clearly legible as ones like Verdana, Times New Roman, and Arial.

Food riots are starting again. The same problems that cropped up a few years ago are hitting poor countries, and the causes aren't much different. Gas prices are going up, increasing costs of delivering and producing food. Cold weather is hurting growing in some major areas, and the use of fields to grow biofuels rather than food is creating even more shortages. With the price of food and fuel going up, that's a recipe for the kind of inflation that hurts the poorest people the worst.

Arizona murderer Jared Lee Loughner falls into a pattern, according to the Citizen Renegade: he was sexually frustrated. He has a theory that all these shooters are sexually frustrated and hence more likely to go nuts. His thesis is a bit flawed, as he admits: "obviously, being mentally deranged can hurt your chances with women," which makes it an effect rather than a cause. This guy had troubles with women because he was a lunatic and looked it rather than the other way around. Here's a little commonality nobody wants to talk about: he was a pothead, and so were several other recent murderers. Yeah, comedians joke about how you never hear about some pothead shooting the place up but... you do. Just nobody wants to mention that particular connection.

Investigating this lunatic's past, the FBI has soebpenaed the records of a Massive Multiplayer Game called Earth Empires (which I'd never heard of). Mostly they want the chat archives and message boards but if they think they'll find any sort of pattern of crazy or aggressive behavior unique to Loughner in these sources, they're about to be dismayed.

Professor Bainbridge has a question for those who think the Government Health Insurance Takeover Act is constitutional: are there any constitutional limits on what the government can do? Because that seems to be the position of progressives: no limits, only temporary delays before things "progress" again. As long as someone can argue convincingly enough (to a leftist, at least) that this is for the good of others, then government can do it, no matter what.

Meanwhile, nearly half of the states in the US are suing to stop or block portions of the Government Health Insurance Takeover Act. Its almost as if people really just don't want the thing.
Oregon's recent tax increase resulted in business and the wealthy finding ways to hide, shelter, or move their assets out of the state to avoid the taxes. Rich people can do that, they have resources. Businesses are fleeing California's incredibly hostile environment and high taxes, and states with lower taxes and more business-friendly policies (Texas for example) are growing and prospering. Illinois recently raised the state income tax by 67% and the corporate tax by almost 50%. Unsurprisingly, other nearby states are starting to get new businesses moving in, and wealthy people are finding other places to live.

Home values have fallen 26 percent since their peak in June 2006, worse than the 25.9-percent decline seen during the Depression years between 1928 and 1933, Zillow reported.

What’s worse, it’s not over yet: Home values are expected to continue to slide as inventories pile up, and likely won't recover until the job market improves.

Shelter, gas, and food: the basic needs of people are all extremely troubled and look to be worse in the near future at least. Small wonder gold is at nearly $1500 an ounce.

Blackbeard was one of the most feared and vicious pirates during the height of their reign of terror in the Atlantic Ocean. His treasure has long been lost, but his flagship Queen Ann's Revenge, has rotted off the shore of North Carolina for centuries. The wreck has been picked over thousands of times by divers and looters, but they missed something: Blackbeard's sword which was recently discovered -- or at least the hilt. The iron blade has long since corroded into nothing, but much of the the hilt of his cutlass was made of or plated with gold, which does not rust.

Miramax was shut down. After producing some of the best and most popular movies in the last twenty years, the semi-independent film studio has been closed. In fact, nearly all of the semi-independent film studios have been closed, such as New Line Cinema, Fine Line Features, Picturehouse, Warner Independent Films, Fox Atomic, and Paramount Vantage. Why? Because the film industry makes most of its money on the international market and thus, financing for smaller movies without huge overseas sales is just not something studios are interested in. These little studios were largely created to expand shelf space for their products, but new distribution models and overseas sales have eliminated that as an attractive option for movie producers. Edward J Epstein at The Wrap has the whole sad story. The result is that there's going to be even fewer interesting, creative, and daring works coming out of Hollywood. Miramax has been rebuilt as a new company by the way, so its sort of still there, just not what it once was.

James Bond may be back in 2012. After all the financial woes and troubles, the next film is slated to begin filming soon, with Daniel Craig as Bond and Sam Mendes (American Beauty, Road to Pedition, Jarhead) directing. I'm skeptical that Mendes has the style and chops to film an interesting action movie, but he's proven he's more than willing to put a personal message in his work. Curiously most of the commenters at Deadline Hollywood seem to hate Quantum of Solace, but I liked the film. As a Bond film its not real strong, but it does follow well on the heels of Casino Royale and helps build the new Bond character into his well known persona. These latest films are more Bourne than Bond, but hopefully he'll develop more into Fleming's character over time.

Warming ain't what it used to be. The latest computer modeling has reduced the amount of predicted warming according to alarmists by 25%. In other words: as they are more scrupulous, more careful, and use more advanced, better-informed modeling, the warming is going away. Still a flaw: computer modeling has yet to work to predict any climate patterns, it can't even be used to properly show what climates are like in the past.

Interesting note about typefaces and recall. I'm no typographer but letterpress printing is a hobby so I am always interested to learn more about how to choose the best face for the work.

I have noticed that I don't have quite the same capacity of recall for material read online as in hard copy, but have assumed other factors were responsible (like tactile focus, or simple habit of learning).

The variety of topics on Word Around the Net is always refreshing. I've added you to the blogroll on my blog. :-)

Thanks for the kind words and I appreciate the link.