"Let your gun therefore be your constant companion of your walks."
-Thomas Jefferson 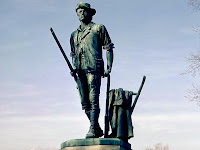 So, congressman Peter King (R-NY) wants to present a bill making it illegal to carry a firearm within 1000 feet of a politician. I guess I can see the attraction to such legislation from the perspective of a politician but there are a lot of problems with that idea.

First is the most obvious: the right to keep and bear arms, which shall not be abridged by the government. But that could conceivably be argued around, after all, every right has limits to its free expression, and there are some places you can't carry a firearm.

Second is the thought that while every once in a few years, roughly once a decade on average, a politician somewhere in the US is shot, according to the FBI roughly 45 non-politicians are killed per day by a firearm. So what makes the politician murders so special that they deserve special legislation? When Representative Giffords was shot, five non politicians and a judge were also shot, and killed.

There are practical issues as well: its already illegal to murder someone, yet people do, will a murderer really obey a gun ban? If a politician knocks on my door while I'm cleaning my rifle, am I under arrest?

Fourth is the most important problem, and it relates to the first. The reason why we have the second amendment of the US Constitution in America is specifically in order to make politicians nervous. The founding fathers were not shy about pointing this out in repeated writings and speeches. The point of the 2nd amendment was specifically to keep government on its toes around civilians, to make the government fear the public, not the other way around.

Here's a few reminders of what the founders thought about arming the public:

"[The Constitution preserves] the advantage of being armed which Americans possess over the people of almost every other nation...(where) the governments are afraid to trust the people with arms."
-James Madison

"The best we can hope for concerning the people at large is that they be properly armed."
-Alexander Hamilton

"And what country can preserve its liberties, if its rulers are not warned from time to time that this people preserve the spirit of resistance?"
-Thomas Jefferson

"When the people fear their government, there is tyranny; when the government fears the people, there is liberty."
-Thomas Jefferson

"Before a standing army can rule, the people must be disarmed; as they are in almost every kingdom in Europe."
-Noah Webster

If we make politicians, mere servants of the people, a special class around which no man may have a weapon (even to nearly a quarter mile away), then we have violated the very principles of America's founding and of liberty. The personal sense of importance and entitlement that politicians tend to have (the higher level of office, the greater this sense) lends them to think such a bill is perfectly reasonable; after all they are so very critical to the nation, not like some mere clerk at a store or ditch digger.

The truth is, politicians are pretty well thought of as pond scum by most people and their jobs are supposed to be temporary, minor, and in the service of the public. There is nothing magical or special about politics, and politicians are not a special people. They have the same worth and innate value as any other human being, no more. And when it comes to America and guns, they are the ones who really should be slightly nervous around the public, which bears the power to remove them from office. Kind of like how you're nervous around your boss when he's not around very often. Why's he here? What does he want? Am I doing this right?

Taking arms away from people near the government reminds me entirely too much of the way it started in olden days when you had to disarm around the nobility, then couldn't have any weapons at all in case you thought you'd rise up and revolt in disagreement. It isn't that I like guns or the threat of violence, I hate it. It isn't that I want people packing sidearms when they talk to a politician. Its that the threat of losing our liberty is too great a danger to allow the slightest encroachment beyond a specific point.

No, Representative King. Not here.
Posted by Christopher R Taylor at 7:57 AM

Not to alarm any politicians, but 1000 feet is not that far to a gun. Many a hunter has dropped a deer or elk in eastern Oregon at 300 yards or more. I saw another poll asking if stronger gun laws should be put in place to make it more difficult for a mentally handicapped person to purchase a gun. As always with these disasters/tragedies, people believe that they can force them not to occur if we had just the right law, or more laws, when it's really just a case of a nut-job and no amount of legislation is going to totally make us safe from that type of person.