Pearl, Pearl, Pearl, he's nutty as a squirrel
If you'll be Mrs. Scruggs, We'll live on kisses and hugs
Like Juliet and Romeo. 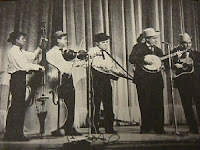 Flatt & Scruggs are a pair of old timey bluegrass types that somehow became famous and made money in their work. There were a lot of fellows around like them such as the Stanley Brothers, Del McCoury, and Jimmy Martin, but only a few really became semi famous such as Bill Monroe and Flatt & Scruggs.

This is the kind of music made more familiar and popular recently by the Coen Brothers film Oh Brother Where Art Thou and is so much a part of Americana it ought to be included in the Baseball and Apple Pie jingle (Chevrolet, not so much).

"Pearl, Pearl, Pearl" is about the two members of the band going to spark on a girl of that name, heading off together. Each of them court the lass, mostly by running the other one down, and the results aren't just nice to listen to, but hilarious as a result. Some day I'll run down a list of all the old songs mentioned in cowboy books I love and build myself a disc with them all, so I can steep myself in 19th century culture. At least back then they didn't see the need to call women names so they felt better about themselves, and nobody had a studio to make them sound professional, just their talent.
Pearl, Pearl, Pearl, come let us see our girl
Are you still our valentine? Do you still look so divine?
Come and let us see our darlin' Pearl

Pearl, Pearl, Pearl, don't give your love to Earl
I have got a horse and mule, Forty acres near a school
We'll be happy as two bugs

Pearl, Pearl, Pearl, you'll get no love from Earl
This here man is such a sap, He won't hold you on his lap
Unless you are an old 5-string banjo

Pearl, Pearl, Pearl, he's nutty as a squirrel
If you'll be Mrs. Scruggs, We'll live on kisses and hugs
Like Juliet and Romeo.
Here's a video of the song; this is actually from the Beverly Hillbillies, in which they were written to have a crush on Jethro's mother Pearl Bodine.

*This is part of the Songs I Like series
Posted by Christopher R Taylor at 7:25 AM

I know a guy who plays the fiddle who played with Earl Scruggs road band for a few years in the 70's. Said Scruggs was very strict: If you played for him you didn't drink, didn't gamble, didn't chase women, and you were to go to your hotel room as soon as the show was over. If you didn't like it, there were 1000 other players lined up who would do your job for free, so hit the road.

My friend said he followed all the rules, but one night he had a particularly troublesome time hitting the right notes on his fiddle, Scruggs gave him a few severe looks while they were onstage, and after the show Scruggs gave him $100 in cash and told him to go home. This was after two years of touring with him!

I tried to learn to play the banjo once... learned a bunch of the chords and a few different finger rolls, but could never play fast enough. It is a downright athletic instrument to play.