"Can anyone prescribe a course of action with any confidence they could reduce the probability of Loughner doing what he did?"
-Timothy Carney 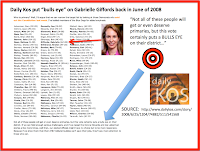 In a reprehensible murderous act of violence, a domestic terrorist named Jared Lee Loughner opened fire at a political rally killing six and wounding one. Among the dead was a federal judge John Roll and a nine year old girl. Representative Gabrielle Giffords (D-AZ) is in the hospital fighting for her life. I'd like to imagine a time when no one thought it was proper to open fire in a crowd, when people's hate and insanity did not drive them to kill, but I just don't see that happening.

Loughner was accompanied to the rally by someone else who the cops are looking for right now. Who this person was and what their role was is unclear, they conceivably might have had no idea what this loser was about to do and ran for their lives, or they might have been in on it the whole time.

Loughner was a nutjob, a man who wrote about the government "mind controlling" people, a fan of the Communist Manifesto, Fahrenheit 451, and Mein Kampf. He declares he won't trust God, is fixated on the need for a new currency, and is determined that people need to control their own grammar. In short, he's fully packed with crazy, wrapped in loony, with a creamy insane center.

If the man had any clear political leanings, its to the left based on his writings. Putting it mildly, he's not the sort of guy who loves Rush Limbaugh and follows Sarah Palin's facebook page. That hasn't stopped the press and the left from speculating though. Before much was known, Leftists all over the place started looking for ways to link this to the Tea Party movement and conservatism in general as Warner Todd Huston runs down at Right Wing News.

The truth is, this guy wasn't motivated by political ideas, just his insanity. That hasn't stopped the speculation and determination to find some motivation and link between his ideology and his actions. Consider, though, the contrast between these shootings and the Fort Hood shootings, and the reaction by the press and the left. Byron York writes:

"The important thing is for everyone not to jump to conclusions," said retired Gen. Wesley Clark on CNN the night of the shootings.

"We cannot jump to conclusions," said CNN's Jane Velez-Mitchell that same evening. "We have to make sure that we do not jump to any conclusions whatsoever."

"I'm on Pentagon chat room," said former CIA operative Robert Baer on CNN, also the night of the shooting. "Right now, there's messages going back and forth, saying do not jump to the conclusion this had anything to do with Islam."

The next day, President Obama underscored the rapidly-forming conventional wisdom when he told the country, "I would caution against jumping to conclusions until we have all the facts." In the days that followed, CNN jouralists and guests repeatedly echoed the president's remarks.

The man screamed glory to Allah, was a very strong and well-known Muslim, and plainly shot people based on his insane understanding of his faith, but people went out of their way to avoid pointing out the obvious.

Why? Because the left hates the Tea Party movement and conservatism, but more importantly presumes the worst out of it. The first reaction of almost every single leftist when the movement really started gaining momentum was "oh no, they'll get violent, I'm scared of their gun-toting extremism!" This is known as "calumny," a presumption of bad by someone without rational or evidential basis. They just know that the right is violent, extremist, and dangerous -- not to mention morally corrupt and stupid -- so any time something happens that might conceivably be linked to the right, no matter how unlikely, they assume it.

However, since Islam is a minority religion, practiced by minorities, in an area that they believe has been oppressed by white Europeans for centuries, then it gets the benefit of the doubt. They fear an anti-Islamic mood in America more than Islamic terrorism. They are more concerned about the mood of the nation turning hostile toward Islam than they fear the open and obvious hostility of Islam toward America. And they want the country to avoid support of any action against radical Islam. So Muslims must be protected.

And in a way this comes down to team playing. Conservatives tend to be more suspicious of and opposed to Islam (or more properly Muslim terrorism and anti-American rhetoric) and support the War on Terror more strongly so they have to be on the other side. All the wrong people hold those positions, so they have to question, challenge, and fight against it. To be certain, many on the right do the same thing with the left: Michael Moore says something? Then its wrong!

Its just sad to see the kneejerk reaction here. This isn't new. When Timothy McVeigh blew up a day care center and most of an Oklahoma government building, President Clinton repeatedly blamed talk radio for the act. When 9/11 happened, they all started looking for ways to avoid blaming Muslims and find blame in the US, to portray it as an extreme but not unsurprising response to the sins of the United States.

When politics dominates your understanding of the world, when there's nothing but what you can measure and test and sense, and when power here and now is the greatest goal in life, I guess you'll always ram everything into a politics shaped hole. But that shallow, immature view of life is just sad to behold, and I'm glad at least some are proclaiming the need to avoid politics entirely in the analysis of some events. This guy was just a crazy doing something evil, not a helpless robot forced to take action because he heard something on the radio.
Posted by Christopher R Taylor at 8:56 AM

Terrorists commit their acts to accomplish specific political goals. Jared Loughner was not a terrorist, domestic or otherwise. He was just crazy.