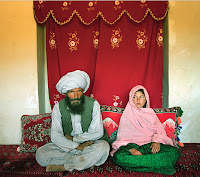 Recently an Imam issued a Sharia ruling about marriage of underage girls for Muslims. He studied the Koran and the other Islamic documents and he came to this conclusion:

Scholars very nearly agree that it is the right of the father to marry off his young, immature daughter. This is owing to his authority over her, for as he is responsible for directing her and providing for her, he is also responsible for doing what he believes is in her interest on the issue of marriage.
...
The Noble Qur'an has also mentioned the waiting period [i.e. for a divorced wife to remarry] for the wife who has not yet menstruated, saying: "And those who no longer expect menstruation among your women - if you doubt, then their period is three months, and [also for] those who have not menstruated" [Qur'an 65:4]. Since this is not negated later, we can take from this verse that it is permissible to have sexual intercourse with a prepubescent girl. The Qur'an is not like the books of jurisprudence which mention what the implications of things are, even if they are prohibited. It is true that the prophet (PBUH) entered into a marriage contract with A'isha when she was six years old, however he did not have sex with her until she was nine years old, according to al-Bukhari.

Well, at least he waited until she was nine. Note: when non-Muslims mention this, it tends to be met with outrage and fury by radical Muslims, for daring to disrespect their prophet.

This story comes courtesy the website Translating Jihad.
Posted by Christopher R Taylor at 11:34 AM