“It seems to us there is a very strong case to be made that the ugliest political rhetoric of the past 48 hours has been that coming from the side whose leading voices are attempting to make sense of a senseless crime by blaming their opponents for it.”
-James Taranto 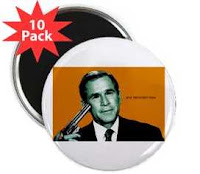 Compare these two lists. The first comes from Rush Limbaugh yesterday, and its a list of the things the left tried to blame on conservatives (with the actual culprits) over the last couple of decades:
Most of the latest guys are 9/11 Truthers, by the way.

Then there's a huge list at Michelle Malkin where she lists an enormous number of personal attacks, calls for violence, violent imagery and violent fantasies as well as actual violence directed toward Republicans and conservatives by the left.

Now, I don't think either side is more inclined toward violent behavior than the other. I just think its sad that the left tries so hard to paint the right as crazed murderers while completely ignoring their own side. Professor Jacobson at Legal Insurrection notes that according to a recent poll, most Americans are ignoring the media blitz to try to paint this shooting as the responsibility of conservatism and Tea Party movement rhetoric. Yet he ends with this:

I would not be surprised if years from now the numbers of Democrats and Independents who believe that Sarah Palin caused Jared Loughner to commit murder roughly approximates the percentages who believe Bush had prior knowledge of 9/11.

And I sadly suspect he's right.
Posted by Christopher R Taylor at 7:57 AM

What is sad for me is the use of violent rhetoric and imagery that both sides use during elections and as a way to fund raise.

The media people on both sides of the issues and the politicians continue to get rich off of the peddling of fear.

America is still a great place to live yet if I were to daily watch or listen to all of the news channels I am sure I would be as upset as the true believers on both sides of the aisle. I like being informed but why fill my head with such garbage there is a real difference between news and political opinion and I think we have lost our way in America.