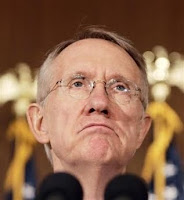 A few days ago I posted a bit from President Obama from his State of the Union Speech as a Quote of the Day. It was about earmarks, and his claim that he'd veto any bill containing them that crossed his desk. Later in the day I posted Senate Majority Leader Harry Reid (D-NV)'s response, because it was too juicy to pass up.

Asked during a one-on-one interview with NBC whether Obama was wrong to promise a veto on any bill that contains earmarks, Reid quickly replied, "of course."

"This is an applause line," Reid said. "It's an effort by the White House to get more power. They've got enough power as it is."

Reid, along with other lawmakers who support earmarking, argues that eliminating the practice simply puts more discretion in the hands of executive branch officials who have authority to fund projects. "I have a Constitutional obligation to do congressionally directed spending," he said. "I know much more about what should be done in Elko [or] Las Vegas, Nevada, than some bureaucrat does back here."

Reid said voters should recognize that eliminating congressional earmarks does not, in itself, reduce spending but changes how the same money is spent.

"I think it's absolutely wrong and the public should understand that the president has enough power; he should back off and let us do what we do."

Now, I'm as skeptical as Majority Leader Reid is about the president's intentions here. He was looking to win back support and make voters like him again. I'd love to believe he meant it, but given his past performance and statements on the topic (this isn't the first time he's said this kind of thing), I just don't trust him to follow through.

But Senator Reid's statement here reveals a lot more about himself than President Obama. Notice Majority Leader Reid's primary concern here. He isn't upset with the idea of earmarks being banned because they're so critical, he doesn't argue that this is important for serving the country. He weakly mentions the constitution because its trendy now, but his primary concern is about power.

Earmarks are the congressman's way to throw goodies to his constituency, they are about taking funding and earmarking (tagging for specific projects) to help people in his district. That's why he mentions the bit about Elko and Las Vegas; he's insisting that he has to do this to get the money pointed the way he wants it to be.

Earmarks are not empowered by the constitution, they have no legislative power. They are suggestions that the executive department direct spending in certain ways, not commands with the full weight of the law. That's how the system works: congress determines spending in broad categories, and the executive department determines how to implement this spending in specifics. Congress funds the CIA, the CIA uses that money on projects and operations.

Majority Leader Reid here is insisting that if the executive department ignores earmarks or refuses to allow them, then its overstepping its constitutional boundaries, but the reverse is true. Earmarks are congress overstepping theirs. Because earmarks are almost never ignored: agencies understand that their bills are paid by congressional appropriations, and angering congressmen is not in their best interest. In other words, congress isn't just appropriating money, its directing agencies in how to spend that money which is an executive branch privilege, not congressional.

For Senator Reid, this is about power; the power to direct funds for his pleasure, reelection, and assistance of friends. Taking that away reduces his power, and he is upset that the president would even pretend to step on that power. This reveals much about Senator Reid and probably most of the rest of the folks in congress and their attitude about your money.

And it says a lot about how wretched the voters of Nevada are for reelecting this pathetic fool.
Posted by Christopher R Taylor at 11:26 AM