"No one can terrorize a whole nation, unless we are all his accomplices." 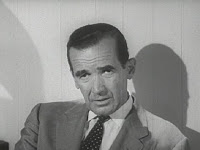 On March 9, 1954 President Truman responded to a death threat against Senator Joe McCarthy. He said "We’d have no entertainment at all if they killed him." By that point, McCarthy's increasingly unhinged rants and grandstanding were taking the wheels off his anti-Communist vehicle, and he was increasingly an object of derision rather than fear or respect.

That was the night that Edward R. Murrow ran his Murrow’s See It Now program attacking Senator McCarthy, the show that George Cloony's movie Good Night and Good Luck ran presenting the show as some sort of triumphant attack on McCarthy that tore him down, boldly defying the mood of the day. The movie did violence to the history of the time and the fear that the Communist-hunting efforts spread across the nation. Nobody questioned it out loud during the height of its power and popularity, no one. It wasn't until the fear had passed that Murrow ran the show, not as a crusading hero to stop it.

Even Edward R. Murrow himself admitted it at the time - and a few years later produced and featured in a special broadcast about the dangers of communist infiltration into the US.

Murrow himself is held up as a mighty figure, a paragon of broadcast news and integrity in journalism. Any time a particularly popular and apparently influential member of the news media becomes prominent they are compared to Murrow (most recently comedian Jon Stewart if you can believe it). Over at Newsbusters, W. Joseph Campbell paints a slightly different picture of the man:

And Murrow, although he's held up as the white knight of broadcast journalism, was very much a compromised character. Even his own biographers have identified what we would see today as disqualifying ethical lapses in his background. He claimed degrees that he did not earn, he coached Adlai Stevenson on the finer techniques of using television during the 1956 presidential campaign. Privately, he did this, but if that was known, and a well-known broadcast journalist was doing that today - well, I don't know, but I suspect there would be considerable controversy about that kind of conduct.

No, Murrow was no white knight. He really wasn't. But he's been held up, and I guess perhaps TV needs to have somebody like that, someone who is regarded as the model of the integrity, of high ethics, and so forth, but he really wasn't.

Murrow is a hero to journalism because of some good work he did, but he also did some cheesy work such as his Person to Person "up close and personal" show featuring sports stars and celebrities ala Barbara Walters. He wasn't any greater a person than any other journalist, although he certainly is better than some. At least he never ran any deliberately false documents to try to take down a sitting president during an election.
Posted by Christopher R Taylor at 9:44 AM