"Blistering Barnacles!"
I remember reading old Tintin books in high school and I really enjoyed them (along with Asterix and Obelix). Tintin as a character never made a lot of sense to me, but the stories were very Indiana Jones adventures, a pulp with terrific art in comic book form.

So Steven Spielberg is working on a film version of the Tintin stories, which is a good fit in my mind. There's no real violence, guns never achieve much (except for an occasional bad guy killing someone), and it has a nice time period feel to it with whimsical but serious characters. The film is done in a very distinctive animation form that basically pulls the art of the comics out into greater depth: 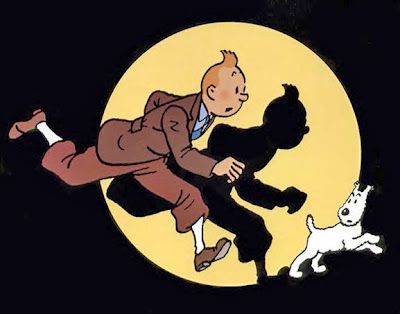 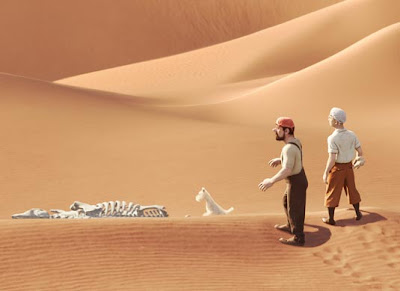 The film has some great voice casting: Simon Pegg and Nick Frost as the twin detectives, Andy Serkis as the captain, Jamie Bell as Tintin, and Daniel Craig and Cary Elwes are also involved. Filmofilia has more information.

In 2010 news, movies didn't do so well. The biggest blockbuster attempts were pretty disappointing and overall, sales were lower this year than last year, the second lowest grossing year of the decade (2008 was lower).

The best selling movies of 2010 in North America were Toy Story 3, Alice In Wonderland, Iron Man 2, The Twilight Saga: Eclipse, and Inception. Of them, only one was 3D and would have sold as well without it. In fact, 3D didn't seem to help sales at all, despite being shoehorned in pretty much every film possible in 2010 after Avatar's success in 2009.

A lot of movies that cost quite a bit and had wide releases but bombed is provided by Moviefone's Cinematical:

I was hoping Jonah Hex was going to be good: a post-apocalyptic cowboy vs zombies, its like they picked all the coolest concepts (or at least popular) for a single movie. Apparently it was just awful.
Posted by Christopher R Taylor at 8:24 AM

2011 looks to be an interesting year for movies.

-Atlas Shrugged
-Green Lantern
-Captain America (I could care less about the Thor movie)
- Kerouac's 'On The Road'
- Reboots of Planet Of The Apes and Conan The Barbarian
- A remake of Footloose (which I am interested in because a) it speaks to the libertarian in me and b) the story is based on true events that happened in the county I live in, and are tied to the same church that recently led an effort to prevent liquor by the drink laws from passing in our county)

So what's missing from this list?
Any original ideas or new stories.