A FLOOD OF LAWS

The more laws a society has, the more lawless it has become. 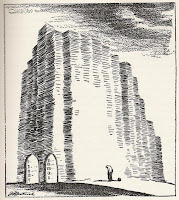 One of the most dangerous things about government is that the people inhabiting it feel as if they must do something in order to justify their existence. This is particularly true in cases of emergency or disaster, where a crisis (real or imagined) prompts congressmen to act as if they are taking swift, decisive action so they can campaign about it later.

Sometimes there's no particular crisis, just the understanding that they can achieve a lot of goals they've always wanted and its time to ram through the laws. This month, retiring governor Arnold Schwarzenegger of California was handed more than 700 bills by the state legislature. Here are just a few of them:
Governor Schwarzenegger actually vetoed several laws including a mandate that all insurers must cover maternity expenses, a bill requiring businesses to inform women going on maternity leave about breastfeeding, and many bills that would have created new agencies, commissions, and other expensive government bodies in a bankrupt state which absolutely must cut spending.

Other bills were pretty hard on insurers, who are already strongly considering abandoning the state to its own troubles to begin with. Insurance costs in California continue to skyrocket for companies, and addition of laws such as the insurance exchange bill which will allow private customers to seek insurance deals that big companies get will just increase those expenses.

The reason big companies can get better deals on insurance is because insurers know they will be able to pay and will be steady business. Individual customers are much more risky for insurers, and as a result are given less access to these deals. Joe Blow can't be trusted to keep paying (and can't pay as much) as big companies can.

Insurers can no longer charge co-payments for certain preventative care doctor visits, including mammograms and vaccines. They also can't deny coverage for children with pre-existing medical conditions. In a partnership with the Government Health Insurance Takeover Act, adults are allowed to remain covered under their parents' insurance plans as children until they reach age 26.

A lot of the laws are minor changes or deleting old laws now considered out of date, some are just bookkeeping and the business of government, but a lot of them are more spending, bigger changes, and things that frankly government ought to best stay out of.
Posted by Christopher R Taylor at 8:29 AM

I think the one law that is going to cause the most consternation s the one that does not allow insurance companies to set rates based on gender any longer.