"Rape was so overused that it became a hackneyed plot device." 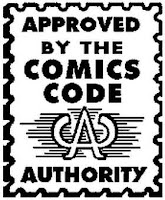 In 1948, a psychologist named Fredric Wertham claimed that comic books were corrupting America's youth. Parents were concerned at the violent and rebellious tendencies of American teenagers, and instead of looking at themselves and their teaching looked at everything else around them. Music, clothes, motorcycles, comic books, radio dramas, and movies, all were blamed for these troubled youths who just wouldn't do what they were told.

Wertham wrote an infamous book called Seduction of the Innocent in which he pointed to many lurid comic book titles which focused on sex, violence, horror and monsters, and themes of incompetent or stupid authorities. Essentially what we have today in popular entertainment media, but at a level and tone that was incredibly more subdued and mild. Where today MTV is trying to market a young teenage TV show where the protagonists have sex and appear nude, the old comics would have a girl in a ripped dress being menaced by bad guys and kissed when she didn't want it.

Racism was also present in a lot of these titles, as was torture, divorce, and other issues generally avoided in polite discussion. Congress held hearings about the dangers of comics to kids, and the industry went into motion to protect its self. A previous code for comic publication had been created by comic book producers in 1948, modeled after the Hays office film code, but it was never enforced.

This new code, the Comics Code Authority, would be enforced by distributors, who refused to ship comics to newstands which lacked the CCA stamp on the cover. And to get that stamp, you had to follow the code. The full code is rather long, but includes such points as:
What this did was result in very bland, mild, and simple stories which avoided the easy shock, the quick emotional manipulation, and other tricks used in the past. The purpose was to steer comics away from the increasingly gutter-related topics and themes that many had gone into for quick sales and toward more wholesome, positive stories.

Overnight, many titles died, and the public perception of comics was rapidly repaired. It became more like Superman and less like Tales From the Crypt. For decades, from 1954 to around 1986, the CCA was on every single title produced by mainstream comic book companies. "Underground" comics came out in the 1970s such as The Fabulous Furry Freak Brothers which completely ignored the code, but they were only available through mail order or in drug paraphernalia shops. In the 1970s, DC and Marvel both pushed the limits of the code with books that portrayed drug use (such as a very popular and respected series of Green Arrow stories), vampires, and so on.

In the late 80s, comic book giant Marvel experimented with a direct shipping method to comic book stores which had become more common by that point. Titles such as Moon Knight were sold only in comic book stores, and were typically higher quality than the newsstand versions. As this distribution system became more and more common, titles lacking the CCA stamp did as well, since they were not being distributed through the usual system.

By the 1990s, both DC and Marvel had "mature" imprints (Vertigo and Epic, respectively) which usually would not pass CCA muster. Although these were never as big sellers as their other titles, they did grant greater freedom to writers and artists. In 2001, Marvel dropped the CCA badge entirely and went to age-appropriate categories for their comics instead of the code for all. By this point distributors didn't care if titles had the code, and newstand sales had plummeted for comics. Now, its rare to see any comics at any news stand or grocery store when they once were always visible.

Here's the thing; you'd think that the CCA was some crushing burden of censorship which was viewed as a terrible thing by comic book artists and writers. And while most grumbled about it and the companies struggled against the limits, and while the limits took prudence to a level of prudery that was a bit excessive, they did save comics, and they aren't as disliked as you'd think.

In the 1950s, the primary buyer of comic books were kids, 12 year olds buying their latest issue of Superman or The Flash for 12 cents each. They were aimed at kids and the CCA made sure the content was appropriate for kids. Pre-teens do not, MTV aside, need to be reading about miserable divorce, rape, torture, and naked women. It is beneficial for their growth and society in general for kids to learn that authorities can be trusted and should be looked up to. When they get older they can learn that some authorities are bad, but the general presumption should be of respect and trust, unless otherwise proven.

Its true that good writers need to have flexibility to tell a story, and its also true that the primary audience for modern comics is guys in their early 20s, not kids any longer. Yet the pendulum has swung entirely too far the other direction. Now it almost seems that there's an anti-code in place. You cannot publish a comic unless there's torture, horrific and graphically protrayed violence, corrupt authorities, miserable failure of good, and lack of heroic behavior.

Where there once were cartoonish always-good heroes who never lost, now the stories are of brutes with powers who always break the rules to do the most violent things possible to their enemies who are inevitably the worst evil ever just to set them apart from the morally questionable protagonists who are often not heroes at all.

There was a discussion of the comics code recently on Facebook between various old time and modern comic book professionals whose names I'll edit out for privacy but it went like this:

Yeah, because they're not wholesome, and nobody that reads them wants them to be wholesome.

The younger crowd doesn't buy them anymore. However, I view the CCA's demise as yet another sign of our culture's continued decline.

No code for the comics means none for the "heroes." I was shocked and disappointed to see Captain America and Sharon Carter sleeping together last year in "Reborn."

While the limitations of such codes (comics, movies, tv, etc) restrict some creativity, it also inspired many to do better work than get a "cheap laugh". I like the ability for creators to be as 'rude' as they want... I just miss the ability to see something where they aren't.

There remains an "innocence" to the older comics that made them fun to read. Nostalgia notwithstanding, I can still get into these -- even when I come across an old silver age story I missed. In 2001 my daughter was sent home from school with a parental complaint letter over a CRACKED edition, published before my time. I decided then and there to make our offerings "school friendly." That worked. I predict the comics publishers will be begging to get that code back. I'll tell you why the "softer" Cracked worked...schools deemed it safe, and allowed me to hand out box loads to students in schools I visited...I observed kids walking the halls between classes proudly clutching those magazines in full view. Most of them had never read a comic book. To me, the money is in mainstream readership -- and it's very doable. Those outside comics still hold these publications in contempt. I know.

The current editorial staff at the "Big Two" are not interested in gaining back their mainstream audience. They would have to surrender their "ain't it cool" status to do so.
about an hour ago.

The 'big two' are not comic book companies anymore. They are divisions of media giants. Their purpose is to develop properties for movies and TV... and help promote said movies and TV.

Keep in mind these are comic professionals, guys whose names you'd recognize if you're a comic book fan. The problem is, they're guys who worked in the past, and might not be so well known now. They're the old guard who were shoved out in the 90s and later for younger guys who are cool and hip and putting out stuff to please their peers, but not really that beneficial for the industry.

I've written before about how comics are dying, and because they are targeting twenty year olds instead of kids or young teens, they have no future. Without a younger audience to bring into the fold and interest in comics, they will eventually run out of buyers. Reading is becoming less and less popular overall, and while comic book movies are getting more respect and higher quality, that isn't translating into kids wanting to read comics. They just want more movies and games with those characters.

Its possible that the day of the printed comic is coming to an end, that they're just going to be replaced by other media and online images rather than printed in little booklets. I just suspect that if the comic companies were a bit more willing to work closer to the old code they'd put that day off a bit longer and kids would benefit from it.
Posted by Christopher R Taylor at 8:34 AM

You know, storytelling in general seems to be in a steep decline. From comics, to movies, to books, to television, the quality is just not there. Look at old Twilight Zone or Alfred Hitchcock Presents episodes, at the quality and originality of those stories... even during the Comics Code days, I remember D.C. had a couple of publications, House Of Mystery and House of Secrets, that did thoughtful horror and mystery stories, and told them well. Most stories for most of history have been rehashed versions of older stories, but they were creatively done, and today they are just flashy and little else. There are exceptions here and there. The recent retelling of "True Grit" for instance, was better than the original movie. But it wasn't anything new.

In comics, I still have some hope that the new medium of mobile phones and tablet computers will lend to a ressurgence of good comics. These formats lend themselves well to reading comic books, and in fact Marvel has released many old titles (original Hulk, Avengers, Captain America, etc...) on the Comics ap for the iPhone and iPad. But the new stuff that is available for these formats, thus far, has been a bunch of pretentious crapola.

I have to agree with Eric on the "all flash" comment. On those rare occasions I check out what's happening in comics I am struck by how, well, how silly the writing has gotten. It's like listening to preteens pretend to be jaded middle-aged adults.

I don't know when the whole concept of "pushing the envelope" became our cultural imperative, but I do know that, when it comes to story-telling, the philosophy hasn't netted any truly good results.

Frankly, I think writers were better when they had boundaries to fight with. As our Cultural Warriors win more and more battles and culture gets emptier, things only get louder and uglier and more garish - pay no attention to the vacuum behind the curtain, folks.