AS TIME GOES BY 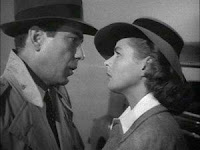 When people ask me what my favorite movie is, I never hesitate: Casablanca. I love that movie from start to finish and its a special delight to show it to someone new, because they're always a bit hesitant about an old movie and it doesn't start off with a bang. The old style imagery and narration seems so dated but by the end, they're crying and cheering and love it as much as I do.

Over at Big Hollywood, Kurt Schlichter wrote a two-part series on movies with Conservative messages including several very new films such as Bolt and 300. One of the themes he mentions is from Casablanca, the theme being “Your personal happiness is not the most important thing in the world.” This is the same theme that came up in Spider-Man 2, where Peter Parker learns that doing the right thing can sometimes mean giving up your dreams.

In a modern culture where the focus is on personal happiness, comfort, pleasure, and health, this is an important message to get out to the public. Schlichter then goes on to imagine what a remake of Casablanca would be like and here the post becomes sheer genius:

Here’s the key quote. Try imagining it coming out of the word processor of one of the pampered, over-paid Ivy League twerps churning out scripts today:

RICK: We’ll always have Paris. We didn’t have, we, we lost it until you came to Casablanca. We got it back last night.
ILSA: When I said I would never leave you.
RICK: And you never will. But I’ve got a job to do, too. Where I’m going, you can’t follow. What I’ve got to do, you can’t be any part of. Ilsa, I’m no good at being noble, but it doesn’t take much to see that the problems of three little people don’t amount to a hill of beans in this crazy world. Someday you’ll understand that.

Let’s assume there is still a director out there who would allow that many lines of dialogue in a row without a shaky camera jump cut. Even then, we’d still get Victor Laszlo as an uptight, probably Christian, creep with the unreasonable expectation that his wife not start banging another man just because she finds him sexy. Instead of sending her away, Rick would probably tell off Mr. Jesus J. Stickuphisrear, then he and Ilsa would jump on the plane together. Let other people deal with the Nazis – inconveniences like honor and duty just get in the way of validating one’s own feelings! Plus, they’d probably cast Ashton Kutcher as Rick and Katherine Heigl as Ilsa. And switch the location to Vegas. And change the Nazis into CIA agents. And make Sam into a streetwise hustler played by 50 Cent, who could also do a hip-hop version of As Time Goes By that somehow incorporates the phrase “my bitches.”

And you know what? I'm absolutely certain that's what it would be like, too.
Posted by Christopher R Taylor at 7:45 AM