An old joke has an American in Paris asking a bookseller for a copy of the French constitution. Irritated, the Parisian bookseller replies, "We do not sell periodical literature." 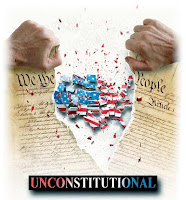 I knew it was a matter of time before this happened. The Founding Fathers of this nation have long been considered icons of liberty and greatness, men we all owe a deep debt of gratitude to for the country the United States became, no matter where you are in the world. For centuries, the US has never once wavered in its appreciation and honor for these men... until now.

The left departed more than a century ago from the ideals of liberty that the term "liberal" originally meant. They started to define liberty more in Marxist terms than Jeffersonian, but continued to appeal to the constitution and the founders in their rhetoric. In the 1960s, hippies pointed to the 1st amendment for defense of their ideas, and even to this day you'll read the left quoting (or misquoting) the founders to support their theories.

Yet, just in recent months, that all started to fall apart. The movement got its more respectable start with Justice Stevens' creative manipulation of facts to argue that Madison didn't really think individuals had the right to keep and bear arms, despite his repeated writings to the contrary. Then we had Ezra Klein (and now others) saying the constitution is so old and baffling, nobody really can understand what it means.

Now we get this from Michael Lind at Salon:

Let's stop pretending the Constitution is sacred
Freedom rests on a culture of constitutionalism, not a particular document

But Tea Party constitutionalism represents a deeply flawed understanding of America's founding, which ought to be based on the revolutionary idea of the power of the sovereign people to make and unmake constitutions of their design, not on superstitious veneration of particular constitutions handed down by wise demigods.

Lind isn't alone. Just in the last few days, the Washington Post, New York Times, and even some Democrat congressmen have joined in the attack: the constitution isn't sacred, the founders were nothing special, the Republicans are acting weird when they venerate the document, we must move on past that.

Why this attack on the very foundations of the United States?

For the left, the problem is what these men stood for, believed in, fought for, died for, and achieved is beginning to clash more and more with what the left wants to achieve. Their ideals and the constitution they wrote keeps getting in the way of the left's goals and ideals. I have waited for the left to start to turn on the founders because of this, but its taken a long time because frankly people weren't studying exactly what they taught and why for a long time.

It used to be the left who appealed to the constitution for their push on the limits of cultural decency and excesses. Today, its the Tea Party that's lauding the constitution, calling for a return to its ideals, and appealing to the founders for their positions. And unlike the Hippies and radical left... the Tea Party Movement really does have the founders on their side.

The left is now faced with a quandary: the more people know about and understand the US Constitution, what it really was intended to be, and how the founders thought, the less they'll agree with the left. And conversely, the left has long ago abandoned the ideals of the founders to "progress" to an ever changing leftist ideal that continues to erode personal liberty to achieve an academic's sense of social and economic "justice" where nobody is ever unhappy, uncomfortable, offended, or has more than anyone else.
Lind tries to argue that the constitution really was about rebellion, change, and continual manipulation of law to fit the ideas of the time. The founders thought and argued otherwise. They believed that the constitution was merely a statement of transcendent, absolute ideals of freedom, justice, and law that all should agree upon in order to have a republic at all. When Jefferson called for continual rebellion, he didn't mean to keep "progressing" to an infinite extent of never ending change, he meant that you had to continually fight to the death against government encroachment upon liberty.

For the left, the constitution is no longer a document they can support or appeal to because it so plainly opposes what they want to accomplish. And as genuine understanding of the founders, the constitution, and the principles of liberty upon which the United States was built spreads into the public consciousness and becomes more established in younger, fresher minds in government, the more it has to be abandoned, opposed, attacked, and torn down.

The veneration of the founders is finally starting to fall apart in the left. The only question is how successful they'll be in twisting and violating that image to achieve their goals in the American public?

Expect in coming years to see songs, TV shows, and especially movies mocking and tearing down the founding fathers. Stories of the real Jefferson and what a hypocritical scumbag he supposedly was. Stories of the "lost" founders who have been covered up. Stories of the constitution's various incarnations and why the one we got was inferior, and so on.

Watch for text books to begin to downplay and attack the founders, undermine the constitution, and focus more on modern leftist ideas and figures for children to honor. Expect to see psychological studies on the bigotry and narrow minded fear of the founding fathers. Watch for obscure or even nonexistent alternate figures of America's past to be appealed to instead of the founding fathers (so very sexist a term).

Oh, and especially look for this specious argument, from Lind:

Tea Party constitutionalism blends several American traditions. One is the tradition of hostility to the federal government chiefly associated with the South, which adopted states' rights ideology in order to resist federal interference first in Southern slavery and then in Southern racial segregation. Now that the Republican Party, founded as a northern party opposed to the extension of slavery, is disproportionately a party of white Southern reactionaries, dominated by the political heirs of the Confederates and the segregationist Dixiecrats, the denunciation of many exercises of federal authority as illegitimate would have been predictable, even if the president were not a black Yankee from Abraham Lincoln's Illinois.

Its racist, you see. Suspiciously Southern, full of bigotry. Blacks were slaves then, the constitution is tainted by that history. Probably shouldn't be trusted. That's why Representative Jesse Jackson, jr pressed to have the parts of the constitution which dealt with slavery read on the house floor, even though they've been overwritten by later amendment and no longer law.

Its been a long time coming, and it will take a lot of work to fight, but I trust for the moment that the veneration of the founders and the constitution is so entrenched in the minds of Americans that it will be a terribly difficult fight for the left. For now, all it will do is make these leftists look radical, unAmerican, and very unattractive to the public. But with the full weight of entertainment, academia, and legislative power behind them, I fear the left will begin to turn it around unless we all fight hard to stop them.
Posted by Christopher R Taylor at 10:40 AM

The other attack I see with increasing frequency is on the Constitutional idea of protecting minority political factions from being steamrolled by the majority. From attacks on Federalism to attacks on the non-proportional make-up of the Senate, you see liberals increasingly treating these as Constitutional bugs instead of features. And many people, especially young people, have been trained to think of our government in terms of a direct democracy, and so think a simple "majority rules" should always be the deciding factor in legislative debates, when in fact the founders went through great trouble to come up with a system that obscured and obstructed a tyrannical majority from exercising power with ease.

The thing liberals don't seem to realize is that these things were put in place not just to make passing legislation hard for the sake of being hard, but to provide stability to the Union. The one time in our history when this system completely broke down resulted in the bloodiest Civil War this nation has ever known. Liberals like to pretend such divisions are impossible today, but start opressing the folks in flyover country and rural coastal areas with laws designed for a metropolitan culture and see how long it takes to bring us to the brink of civil war.

Republicans making a big show of reading the Constitution in Congress may be a bit of toothless and silly political propoganda, but
Democrats poohpooh'ing on the Constituion for the sake of polical expediency is a very dangerous game.

One thing I do appreciate with this new house is that all laws introduced, must show how they are tied to the constitution, in essence making the laws that will be coming out of there, constitutional in a way that has not been the case over the last few congresses.