"There's nothing special about Britain. You're just the same as the other 190 countries in the world. You shouldn't expect special treatment."
-Obama administration 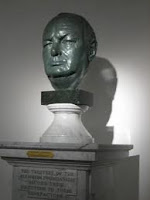 Apparently at this time, there is no intention of inviting President Obama to the wedding of Prince William and Kate Middleton. While that may change, I'm not surprised the British royal family would be reluctant to invite the president.

President Obama has continued to show thinly veiled hostility toward England in general and the royal family in particular his entire public life. He blames the country and the royal family for things that happened to his grandfather while the British government ran the nation of Kenya as a colony, and generally is opposed to white Europeans as a rule due to his leftist academic view of life.

In the past, Obama has returned the bust of Churchill which was a gift from England to the United States, was unsupportive when England yet again faced challenges from Argentina over the Falkland Islands, and sent a cheesy, cheap gift to the Queen for her birthday - an I-Pod loaded with his speeches.

When Brown visited the US, President Obama refused to hold a joint press conference with him and refused to fly British flags. It is unofficial policy of the Obama administration that there is no "special relationship" between the US and England any longer.

So you can see why Obama might be excluded from D-Day memorials and weddings in England. He's not very friendly toward them at all.
Posted by Christopher R Taylor at 12:02 PM