"It's Christmas﻿ not Harry Potter; too witchy!" 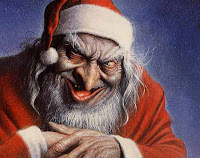 Christmas is a strange time of year in a lot of ways. We have special decorations and clothing, traditions and events for all sorts of yearly festivals, but Christmas is the only season with its own music. To be sure many old Christmas carols are proper year round - when isn't "Joy to the World" proper for Christians? But in general, we save Christmas Music for around December.

I went into a Quiznos the week before Halloween and the music played over their sound system? Christmas songs. I sympathized with the workers there, how much of this stuff can anyone really take? The clerk said he'd already had enough, and given the quality of the music, I couldn't blame him.

There's a lot of Christmas music I like, but there's also a lot I cannot stand. The 12 days of Christmas for example. No matter what version, or who does it or how pretty the music is, I abhor that song. It doesn't matter if its Bob&Doug Mckenzie or the Norman Luboff choir, its just awful. Frank Sinatra has a version with modernized lyrics (for the 50s) on his otherwise good Christmas album and its just as awful.

I'm not real fond of attempted hipster "new" Christmas carols either. Jingle Bell Rock, that kind of thing. Pretty much any time someone tries to invent a new carol, it just isn't memorable or even tolerable. Every once in a while one works, largely because of who sings it. Brian Setzer actually does a good job with several old and largely forgotten Christmas songs, but that's because of his genius and the sound of his band. "Blue Christmas" amazingly worked as well, despite being in this genre.

Other Christmas Carols I can't stand are content-based. Anything about Santa Claus annoys me for lots of reasons I've written about before, but some are so awful just about everyone hates them. Rudolph the Red Nosed Reindeer is one of those songs that clings to your memory like skunk musk to your hair. And "Santa Claus is Coming to Town"... is there any kids song that's more creepy?
He sees you when you're sleeping
He knows when you're awake
He knows if you've been bad or good
So be good for goodness sake!
O! You better watch out!
You better not cry
Better not pout
I'm telling you why...
Good lord, people say the idea of God watching them is creepy but this takes it to a whole new level. You'd better not pout or else!

"Santa Baby" has a really weird vibe, but it sort of appeals to me on a grim, ironic level. That's what Santa is all about: give me stuff, I earned goodies, I want this, and this, and this... when Christmas is all about what was done for you, despite you not deserving it, not the stuff you get.

Some songs are better without the lyrics. Jingle Bells is kind of cheerful when just played, and Silver Bells is okay with the lyrics but prettier on its own, I think.

Then there are the Christmas songs which, while otherwise are good, get demolished by a pop star singing them. That includes just about every Christmas carol ever written.

Here's a few of the rest that are just terrible:
And to round things out, Loreena McKennitt (who I usually enjoy) singing "The Holly and the Ivy "(which I love) and making it so goth and morose it ruins the entire song:
Posted by Christopher R Taylor at 10:19 AM

Keep your "War On Secular Christmas Songs" away from my Burl Ives Holly Jolly Christmas CD, you fun hating Grinch!

Have a Merry Christmas, Christopher.

Merry Christmas to you and your family, Eric!

And then there's this classic: