"I would rather beat the Yankees regularly than pitch a no hit game."
Bob Feller 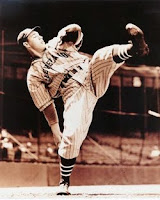 Blake Edwards, talented director of movies such as SOB, Breakfast at Tiffany's and the Pink Panther movies (the good ones), has died at age 88. Edwards was such a talented director that he made quality movies you enjoyed without having such a signature style and system that you could identify the films. He just put out stories with skillful craftsmanship rather than trying to put on a show for himself.

Also dead, at age 92, pitcher Bob Feller whose blazing fastball was so terrifying batters would sometimes just cringe at the box and take their strikes. Pitching before the radar gun, people estimate that Feller's heat came in over 100 miles an hour. Feller was an amazingly capable pitcher, probably the best the Cleveland Indians has ever had, and that's saying something from a club with names like Garcia, Lemon, and Wynn (and Dennis Eckersley, before he became a closer). During WW2, Bob Feller manned anti-aircraft in the Pacific theater. Feller made it to the local Salem Volcanoes every year for a special exhibition visit and I never once made it down to see him, which I regret.

God be with their families and friends at this time of loss.
Posted by Christopher R Taylor at 11:32 AM