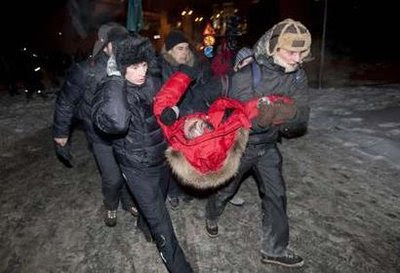 What's that? Its Vladimir Neklyayev, the opposition party candidate in Belarus. Neklyayev is running against the last dictator in Europe, president Alexander Lukashenko. Security troops attacked a rally for Neklyayev and beat him into a pulp. At least he wasn't given radiation poison.

Jim Hoft at Gateway Pundit has more news, including details on a gigantic rally calling for the sitting president to step down after massive fraud in the latest election. As long as the sitting dictator is on the good side of the Russians, he'll probably never leave power, though.
Posted by Christopher R Taylor at 9:23 AM