"Let's march on over to namby pamby land where maybe we can﻿ find some self confidence for you, ya jackwagon!" 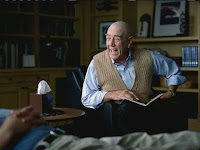 Increasingly we're told that being sad or less productive is a mental illness. Depression isn't merely the deepest, worst sort but just being less perky on a given day. Medicine is handed out to pull people out of depression like Soma in Brave New World. If someone is not as productive and socially active, if they aren't gregarious, outgoing, and happy, more and more are portraying this as being mentally ill.

Meanwhile, psychiatrists have begun to argue that narcissism - the mental state of self love so pronounced it overrules love of others - is not a mental illness any longer. Charles Zanor writes for the New York Times:

The fifth edition of the Diagnostic and Statistical Manual of Mental Disorders (due out in 2013, and known as DSM-5) has eliminated five of the 10 personality disorders that are listed in the current edition.

Narcissistic personality disorder is the most well-known of the five, and its absence has caused the most stir in professional circles.

This is mostly due to a shift in how people are analyzed, with one newer technique pushing a system of many traits to define people rather than syndromes that people are matched to. Yet this also comes at a time when hedonism and selfish attitudes are becoming the standard for modern western culture and it seems to me the techniques are merely an excuse rather than the cause.

Psychiatry has for decades been promoting self esteem as deeply important for a healthy psyche and has long considered a positive self image as being wholesome and good. By contrast, being humble, self effacing, and thinking poorly about yourself has been considered a problem and possibly a sign of mental instability. So it isn't much of a step to consider narcissism no particular cause for alarm.

Don't get me wrong, in today's emasculated feely culture of pathetic half-men a bit of self confidence and rugged individualism wouldn't be so wrong, but narcisssism takes self confidence and turns it into self worship, where you cannot be wrong and always are the center of the world which others only exist in to feed your importance and serve you.

This isn't the first time psychiatry has followed popular culture, changing its definitions and descriptions because the culture around them has changed its mind. Homosexuality was widely categorized as a mental illness along side a sexual craving for children, violence, animals, dead people and other sick lusts. It was only when culture started pushing homosexuality as not being particularly odd or wrong that psychiatrists changed their diagnosis of the behavior, not because of any change in homosexuality.

This tendency to follow culture rather than science and objective standards is partly why I and many others have little trust or respect for psychiatry. As a diagnostic tool it can be useful - yes, this person is insane - but only if it doesn't change to match the society it is in. For example, psychiatry is regularly used by tyrants and dictators to silence and eliminate enemies. This isn't merely a dissident, he's a lunatic for disagreeing with the regime. Put him in a mental institution and pump him full of thorazine because if we kill him we make him a martyr.

Psychiatry is very adored in modern culture by many, and just about every wealthy, high profile person is or has been seeing a counselor for decades now. The problem is they're looking for answers there which the psychiatrist can't offer - and increasingly doesn't want to offer.
Posted by Christopher R Taylor at 8:41 AM

HBO has a dramatic series called 'In Treatment' that follows a fictional psychologist through ongoing therapy session with various patients. My wife and I watch and enjoy this show for the great acting and characters and there is a bit of a voyeuristic quality to it that adds to the show... but one thing you realize is how fruitless all the talking is. None of his clients ever really get "better" in any way, or learn any new skills to cope with life... most of them actually tend to get worse over time, as they uncover emotions and memories better left alone and are then told to embrace them!

Anyway, your post made me think of this show. And also reminded me of one of my favorite Guy Clark songs:

I was feelin' real depressed I was feelin real low down,
I felt so bad I could not get my butt up off the ground,
I was mopin' around the house I was bumpin' into walls,
I was cryin' at the Andy Griffith show and I was snappin' and the dog.
I was startin' to fear for my sanity,
I could not find my ego with both hands.

So I decided professional help was the only hope for me,
So I called up this number which I'd gotten of T.V.
They said "Are you havin' marital problems Are you emotionally impaired,
Are you sure you're bein' followed or Are you just scared of bein' scared?
Well if so you better come on in have a little talk with the doc"

I said doctor, good doctor, I got troubles on my mind,
Listen to me doc, I don't have too much time.
I got this feelin' down inside me and it will not go away
You know it hangs on and bangs on my soul every day
Doctor good doctor I'm grabbin' at loose ends
And I haven't felt like I used to since I can't remember when
Yesterday got past me, and today is all the same
And tomorrow really scares me, man, I just can't play the game

It was the second best hundred dollars I ever spent.