Can we film the operation? Is the head dead yet?
You know the boys in the newsroom got a running bet
Get the widow on the set, we need dirty laundry
-Don Henley, "Dirty Laundry" 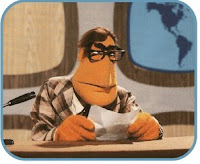 If there's one thing that really annoys conservatives, its how slanted they perceive too much of the news to be. Thousands of blog posts, magazine articles, and talk show monologues have been done on the subject of media bias, complaining that the "mainstream" or "drive-by" or even "state-run" media is controlled by the left and slants the news in their ideological direction on a regular basis.

While some of this is true, and some of it is simply an example of incompetence, sloth, or just plain old ignorance, the truth is even the left complains about media bias. Generally speaking they presume that big media corporations must be biased because the owners are rich and often Republican but sometimes they point to examples such as how much coverage a Democrat scandal can get.

I think most people would rather see better and more balanced, objective news coverage, and lately the Obama administration has been talking about how that could happen. Michael J Copps, chairman of the Federal Communications Commission (FCC) recently spoke on this topic, and Susan Jones writes at CNS News:

In a speech at the Columbia University School of Journalism in New York on Thursday, Copps also said station relicensing should happen every four years instead of the current eight.

"If a station passes the Public Value Test, it of course keeps the license it has earned to use the people’s airwaves," Copps said. "If not, it goes on probation for a year, renewable for an additional year if it demonstrates measurable progress. If the station fails again, give the license to someone who will use it to serve the public interest."

In a way I sympathize with this position. There is some awful news broadcasting out there even if you discard the idea of bias, such as Fox News' continual focus on gossip news and missing little white girls or MSNBC's woeful coverage of just about anything.

Yet the presumption by Mr Copps is that the government would handle things better than private businesses here, and that the quality of news would be superior if only bureaucrats had control over what they considered proper news that benefits the "public interest."

I think its odd to believe that the people who are awful when they work in companies and businesses somehow become better when they start working for the government. There is nothing sanctifying about becoming a public servant, nor is there any rational basis for the idea that people are better and wiser if they choose to work for government rather than business. Even the alleged removal of profit as a motivation does not translate into a better person, only a different person.

And certainly putting news reporting in the hands of partisan government officials, appointed and hired by different administrations as the winds of political mood shift across America is something everyone should be dismayed at. Presently the left might like the idea of a presidentially-appointed group of commissars in charge of what is and is not good news, but they'd be less happy with President Jindal, for example, having that power.

The present situation we have now with broadcast news isn't any sort of utopia. News stories which ought to be covered aren't, stories which ought not be given so much focus are, and certainly there's bias on both sides slanting what and how stories are broadcast. But putting government officials in charge of how the news works isn't the answer, either, and Americans should be extremely suspicious of and nervous about any attempt to do so.
Posted by Christopher R Taylor at 9:45 AM