"The Middle East is obviously an issue that has plagued the region for centuries."
-President Obama 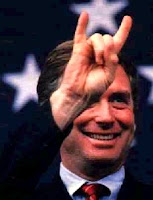 Gaffes are a part of being a public figure. It is simply impossible for someone to speak in public for any length of time without making a mistake. 57 states, potatoe, telling a cripple to stand up, our friends in North Korea, on and on. You just are bound to mess up eventually and say the wrong thing, no matter how good a public speaker you are or what care you take. Human beings are fallible and the more tired you get, the more fallible you become. True, some seem a lot more prone to this than others, but they all do it.

That's why when someone like Janet Neopolitano says something such as "364 days a year" I give them a break. You slip up sometimes, I slip up sometimes, everyone does. Its part of the burden of public life, and unless you're a political enemy you shrug at it, knowing what they meant. Any relationship requires this - if you mock a sweetheart or family member every time they stumble, you're going to make enemies, not loved ones.

That sort of gaffe shows some level of ignorance. Its no big shock that Taylor Momsen is ignorant abut Europe, she probably doesn't know much about America let alone the rest of the world. Other slip ups are a bit more troubling.

For example, the US Director of National Intelligence seemed to be ignorant of a previous terrorist attack. When interviewed by Diane Sawyer, he seemed confused by a question she asked:

SAWYER: First of all, London. How serious is it? Any implication that it was coming here?
(long pause)
CLAPPER: London?
...(later)
SAWYER: I was a little surprised you didn't know about London
CLAPPER: Oh, I'm sorry, I didn't.

Now, it is slightly possible he just was caught off guard by the lack of context or enough information. After all, which London attack was she referring to? London has been the target of terrorist bombings for decades by groups such as Sinn Féin. The problem is, in the video at least he simply seems utterly unaware of a recent terrorist attempt on the city.
Now I'm a bit sketchy on the attack, but then I'm just some nobody writer/blogger, not the Director of National Intelligence for the US. Was he just caught off guard, or did he really have no idea what Sawyer was talking about? Dianne Sawyer is no super genius savant on world intelligence, she has staffers who study all this stuff for interviews and she was specially prepared for this specific interview. She was only better informed than him because she specially readied these questions.

The problem is, the DNI should know a lot more about any topic regarding his field than any reporter, and be ready for any question. At Hot Air where the video of this particular gaffe can be seen, a reader claims the man is very capable and intelligent, but who knows? Too often President Obama's appointees seem more picked for their ideological purity and correct political associations than any particular skill in their field.

Hillary Clinton is no foreign policy genius or even capable at any basic level with diplomacy but she was picked for the job of Secretary of State, chief of foreign relations and diplomacy. Her incompetence in this area has been shown again and again, not the least of which was the humiliating "reset button" affair.

Too often an academic theoretician like President Obama will do this: surround themselves with people who share the "correct" ideas rather than people who are good at the job in question. Presidents can often have this problem, but the more pointy headed they are, the more likely they are to build a cabinet and set of advisers with a common worldview and shared theories than capability in their positions. If it isn't DHS director Janet Neopolitano telling everyone she's working hard on how global warming affects US security, its Attorney General Holder ignoring blatant civil rights and election law violations.

And as a result, the world looks at the US and just shakes its head in disgust and mockery. Those who are a bit more experienced and wise know that this will pass; the US has a virtual revolution every 4-8 years so whatever fools are in power now won't be for long, but in the mean time what damage is being done? I guess people don't fear the US and hate it for being strong and aggressive any more. They hate it for being incompetent, bumbling, and dragging down the world's economy. I can't say that's any better, and from where I sit it seems significantly worse.
Posted by Christopher R Taylor at 9:18 AM