"We felt like we needed some time to consider that" 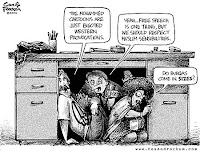 If you go to just about any college, you'll be able to take a Comparative Religions course which examines various religions. You can even get teaching on religions such as Christianity in philosophy and sociology courses, and sometimes courses which have nothing to do with the topic such as Math and Biology when the prof goes off on a personal tangent. Usually these courses contain some misconceptions, misinformation, and outright falsehoods about the religions in question, particularly Christianity.

Christians are kind of used to this; being misrepresented by modern society is something we've come to expect and are usually equipped to deal with. We know that there are some, particularly in academia, who are hostile to faith in general and Christianity in specific and will try to make it look as bad as possible.

At Lane Community College, a professor there wanted to offer a class in the Spring on Islam, but the school cut him off. Why? Eric Florip at The Oregonian explains:

an Islamic advocacy organization [CAIR] says has made "false and misleading" statements about the religion.

So with Islam, if someone complains that they aren't being completely up front and truthful about the religion, the school hops to it. Christianity? Somehow I doubt it. The real reason behind that seems to be best explained in the next paragraph of the story:

That's when college officials decided to step back and re-evaluate the class and the school's role in religious discussions, Spilde said.

So its the bomb plot that triggered their decision. I can only figure two reasons why that would be true: fear that Muslims will get mad if you don't do what you're told... and an excessive need to bend over backward to show Muslims you like them despite an attempt to murder people in the state.

When, say, someone claiming to be a Christian blows up an abortion clinic like happened a couple times decades ago, the reaction wasn't to be nicer to Christians, it was rather the opposite. That was taken as proof, proof of how awful Christianity really is by many academics.

This is the problem a lot of people have with how many, especially leftists, respond to Islam. The reaction is one of subservience and excessive outreach rather than balanced, reasoned equivalence. There's no simliarity of treatment of Islam with other religions, it has become a protected class which has to be treated better than any other faith, to the point of denying and ignoring its flaws and playing up its strengths. When a Muslim complains, the left leaps to obey. Any other faith gets mockery, derision, and contempt.

And that seems odd to most of us out here in the rest of the world, odd to the point of creating irritation and even animosity.
Posted by Christopher R Taylor at 10:51 AM

Extremist Religion-based bombers are not treated equally. Why?