"End-of-life discussions between doctor and patient help ensure that one gets the care one wants." 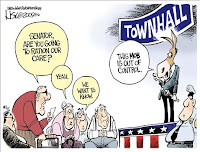 Government Death Panels. That just has a horrible sound to it, something from Logan's Run or a bloody dictatorship. Its one of those terms which is, if not misleading, shapes an image in the reader's mind which may not be entirely accurate. I get the image of a group of dour people sitting at a high bench deciding who lives and who dies.

At the same time, when the left screams about this term, they're not being entirely accurate either. The concept isn't as grim as the term suggests, but the idea that spawned it is very real. the problem is that it isn't new or unique.

"Death Panels" describes how insurers must decide what they're willing to cover and what they are not. In the context of the government, it covers something a bit more grim: the push by government to encourage the very elderly to do without extreme care to prolong their life. For example, say Granny is 102 and she's dying of heart failure. Should she seek a heart transplant so she can live a few more months, perhaps a year? Or consider the case of the uncle who drank his whole life and at age 99 is dying from liver failure. A liver transplant might prolong his life a few months, or perhaps years if the rest of his body can keep going. Insurers would really rather not pay for this kind of extremely expensive procedure.

And personally I think when people get that old and that frail, they probably ought to consider the possibility that they can let that kind of thing go. I know several elderly people who, when they were very old and found out they were dying, nodded and said "well its time then" rather than undergo chemotherapy that might prolong their life a few months.

With the Government Health Insurance Takeover Act (fraudulently sold as "health care reform") came the burden of the US government to make those kind of decisions. Elderly people use more insurance and cost more in health care than any other segment of the population (young couples being next, for child care and birth). To keep costs down, at least some care has to be denied people, and the Obama administration pushed the idea of encouraging elderly people to not seek some care. This was dubbed "Death Panels" by Sarah Palin on her Facebook page, and the idea was dropped.

Until now. The New York Times has a recent article about how President Obama is now adding that idea back into the plan, just like he did abortion funding. Robert Pear writes:

Under the new policy, outlined in a Medicare regulation, the government will pay doctors who advise patients on options for end-of-life care, which may include advance directives to forgo aggressive life-sustaining treatment.

Congressional supporters of the new policy, though pleased, have kept quiet. They fear provoking another furor like the one in 2009 when Republicans seized on the idea of end-of-life counseling to argue that the Democrats’ bill would allow the government to cut off care for the critically ill.

Under the rule, doctors can provide information to patients on how to prepare an “advance directive,” stating how aggressively they wish to be treated if they are so sick that they cannot make health care decisions for themselves.

Mr Pear probably didn't make any friends by writing this up, but it was inevitable people would hear about it eventually. The actual law written up by congress dropped the provision, but by regulatory power, President Obama is adding it back in (as he's doing more and more, expect it to happen a lot in the coming years with a less obeisant congress, as Robert Pear predicts).

This is, as I've noted before, not unique to the government health insurance scheme. All insurers have to decide what they'll cover and what they will not. The more stuff they cover, the more costly the plan. None of them will cover something they consider completely outrageous, like breast implants for your pet cat. This is, in effect, a "death panel" because there are limits to which all insurers will go.

The problem here isn't the concept of limited insurance, that's absolutely inevitable. No insurer can guarantee unlimited coverage of absolutely every medical-related action taken by their customers. This is the dirty little secret that the left didn't want people to consider when they were pushing for this bill (and socialized medicine in general). The push was accompanied by all sorts of examples of insurers refusing to cover people's medical expenses, and how evil that was, and why we need the government to step in because Health Care Is A Right, we were told. For example, President Obama said:

More and more Americans pay their premiums, only to discover that their insurance company has dropped their coverage when they get sick, or won’t pay the full cost of care. It happens every day.

The fact is, Medicare denies more coverage than any other single insurer in the nation. That's something the left either didn't know or didn't care to mention. And of course they'd argue that means we need reform even more so the government can get everything covered! But there's just not enough money to cover it all, especially if you are going to cover everyone, no matter how young, healthy, and disinterested in insurance they may be.

Yet when an insurance company refuses to cover you for something, you have options. You can complain to the government and get them in trouble, if its fraudulent or bad faith. You can sue the insurer and try to force them to do what you want. You can pay more money to the insurer to expand your coverage. You can even change insurers to one that is more willing to help you.

But when government has your insurance, you've got a lot fewer options. The people in charge are unaccountable and often unassailable. They have comfortable, certain jobs and even when the president changes to a different sort tend to stay in their positions. Its not easy to sue the government, and its even harder to get the government to check on its own.

So while "death panels" is a bit dramatic, the reality is that's part of the insurance business and its inevitably part of the government attempt to take over health insurance in the United States. And once the ultimate goal of Obama, Pelosi, Reid, and many other Democrats comes true, there won't be any competitors to turn to if you can't get the coverage you want.

And that's not even getting into how the US Constitution in no conceivable manner grants the federal government power to sell or distribute insurance.
Posted by Christopher R Taylor at 8:30 AM

So, what happens to medical research? The concept of the early adopter is critical to advancing medicine. The untried, expensive, experimental treatments have to be allowed somewhere to have them develop into standard and less expensive treatments down the road.

Have you noticed how few discoveries/advances are made in the normal operation of your average socialist paradise?