"We The People of the United States, in order to form a more perfect Union, establish justice, insure domestic Tranquility, provide for the common Defense, promote the general welfare (notice they did not say provide it) and secure the Blessings of Liberty to ourselves and our Posterity, do ordain and establish this constitution for the United States of America." 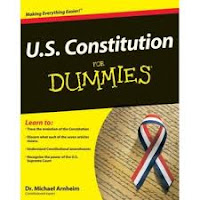 Remember Ezra Klein? You should, he's the one that founded and ran Journolist, the email group made up of hundreds of reporters which was used to try to shape the news according to leftist ideas. He's a pretty reliable leftist and writes for the Washington Post, but recently he really went overboard on his leftist thoughts with this gem, from an interview at MSNBC's Daily Rundown. Newsbusters has the video and an audio MP3 file you can download. Here's the transcript:

INTERVIEWER: You heard all the different politicians talking about the constitution, well this is what's going to happen: when Republicans take over [the House of Representatives] next week, they're going to do something apparently that has never been done in the 221-year history of the House of Representatives, they are going to read the constitution out loud. Is this a gimmick?

KLEIN: Yes, its a gimmick I mean (chuckle) you can say two things: one is that it has no binding power on anything and two, the issue with the Constitution is not that people don’t read the text and think they’re following it. The issue with the Constitution is that the text is confusing because it was written more than a hundred years ago and what people believe it says differs from person to person and differs depending on what they wanna get done.

Now, I hate this style of interviewing. Its not really an attempt to get an answer so much as an attempt to make an editorial statement that is sort of shaped like a question. In any case, Klein has made his position clear here: Constitution hard.

Now I'd argue that few people have actually read the text of the US Constitution, whether in politics or not. It was a matter of distinction and fame that former Senator Byrd (D-WV, KKK) carried a copy around in his pocket and knew it well - that put him in contradiction with every other person in the Senate for his entire five decade career.

The fact is even my mom, who went to school in the thirties and forties, didn't get taught the US Constitution in school. I didn't. I doubt there's a single public school in America that teaches kids the constitution. Every student in the US should be barred from graduation from high school if they cannot demonstrate a working familiarity with the document, but I doubt its even mentioned more than once or twice.

So Klein stating that everyone knows the text is false, blatantly so. Now a lot of right leaning sites are blaring on about how Klein supposedly said the US Constitution has no binding power, but that's not what he said or meant. He meant that merely reading the document into record during a session of congress has no binding power. And it doesn't. Klein believes, like most leftists, that the US Constitution is the highest law in the land and has binding power as a legal document.

No, the problem here is twofold; he thinks the US Constitution is really old and therefore confusing. Now, mind you he'd have no problem supporting the more than a thousand page Government Health Insurance Takeover Act, but the 3 page Constitution, well that's just baffling.
Here are a few other works a century old or older that Klein probably thinks are great and no problem to read:
And so on. Age doesn't make a document necessarily confusing, nor does a newer document necessarily become easier to understand (A Clockwork Orange was written just a few decades ago and is largely baffling, for instance).

What he's trying to do here is set up a narrative, a way of responding to the Republicans and the Tea Party Movement when they complain about unconstitutional spending and demand constitutional justification for any legislative activity. He recognizes that the congressmen who either said "I don't need to justify it" or "what are you talking about" looked like jerks and idiots.

So he's trying to set up a better refutation by saying "well its all so confusing, who can understand it, its so old you see." Strangely enough that age doesn't seem to stop the left from insisting that the 2nd amendment doesn't actually allow you to own or use firearms, and it doesn't stop the left from insisting anything ghastly, obscene, or particularly upsetting to most of America is protected free speech. Nor does it stop congressmen from insisting that any spending whatsoever they desire is perfectly constitutional.

In fact, the US Constitution isn't confusing at all. Its a very plain, simple, and straight-forward document. It was written very tightly and as shortly as possible (because James Madison who was the primary writer was very concerned about huge bills nobody could read), and it can be understood by anyone who reads it.

The only confusion comes when people try their damnedest to crowbar every conceivable spending they can come up with into the document. The truth is, the US Constitution only seems to really confuse people when it says "no." And it says that a lot. The basic position, the default idea behind the constitution is that the federal government starts with no power whatsoever. All the power is presumed to be in the hands of the people, all of it. Then, the US Constitution specifically and very carefully gives limited areas which the people give up some of that power to the federal government. This was a document designed and written to protect people from tyranny by their government.

Klein doesn't like the way the US Constitution is written, as much as he's read it, so he's trying to find a way to get all those "nos" to not mean what they really mean. So this is the talking point: its so very confusing, nobody really understands it anyway, so those Republicans are just making noise to play up to their stupid, gun-clinging, praying radical extremist Teabagger constituents.

Expect to see a lot more people taking up this particular song and variations of it in the future.
Posted by Christopher R Taylor at 8:24 AM

I've started taking on this song already, love it!