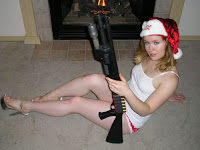 The Tea Party movement has been most visibly identified as being opposed to higher taxes and overpowered federal government. Yet when you go to individual tea parties, you'll always see anti-abortion booths and signs, signs about morality and God, and a general mood of broader conservatism than simple libertarianism. To be sure, if you ask the leadership, they'll always focus on fiscal issues, but the membership includes other issues as well.

A similar coalition was built around the War on Terror, with most libertarians recognizing a greater threat to liberty in the worldwide domination of Islam than in fighting a war to stop that domination. As long as the war was hot, both sides fought together against the excesses and sometimes treason of the left.

Once the war cooled down, the divisions started to show. President Bush's final term ended and without the need for a war time president to have our support, the cracks became wider. Fights broke out, sometimes vicious ones, between the social conservative wing and the libertarian wing of the right. As nominees for president campaigned, the battles got even worse, with Huckabee and former New York Mayor Giuliani representing either side.

Libertarians blamed social conservatives for the legislative losses in 2006, warning worse if they didn't just shut up and do what they were told. Social conservatives rejected Giuliani's life and support of leftist social causes, claiming God was on Huckabee's side. In the end, the GOP machine and open primary system in key states picked John McCain which neither side particularly cared for and the rest is history.

As Dana Loesch writes for Big Journalism, the legacy media is desperately hoping for the same brawl to break out in the Tea Party:

This from Barry Lynn, executive director of Americans United for Separation of Church and State. His sound bites are all about stoking libertarians to feel like disenfranchised underdogs with the goal of rousing them to lash out at the big bully Christian conservatives.

If this happened, the Tea Party would lose its broader popular appeal and the divisions would be easy for the left to manipulate and broaden. And I believe that eventually that this divide will happen.

Its a matter of time, you can't have two mutually disagreeable parties working together without some eventual conflict. Libertarians believe that personal liberty and being left alone is the highest goal and importance in life. Social conservatives believe that adherence to an absolute, objective set of ethical standards is. Those two sides cannot meet. One is all about personal, subjective ideal, the other is about external, objective truth. One is about what I personally think and believe, and the other is about what God thinks and what we should believe.

The frustrating thing for me as a social conservative is that fiscal conservatism is an inevitable and logical result of social conservatism. By modern standards, the founding fathers were incredibly conservative socially, and it was from this ideology that the concepts of personal liberty and limited government developed. Although not all of them were Christians, all were heavily informed by a Judeo-Christian worldview which was presumed in their writings and thoughts.
A recognition of a greater authority than government means you believe government is beneath and obedient to that greater authority. It means you recognize rights, liberty, and justice come from that authority, and not the rulings and judgments of men in power. Belief that man is fundamentally flawed and sinful means that you cannot trust those men with power and that this power must be limited and carefully guarded. The end result is greater liberty, but the cause is social conservatism.

The Founding Fathers were insistent that the republic could only continue if its people were virtuous. They understood that the primary key of a republic is the virtue of its people - like fear is what keeps a dictatorship running and honor a monarchy (for more thoughts on this, read Montesquieu writings). They understood that virtue creates liberty; here are some sample quotes:

If Virtue & Knowledge are diffused among the People, they will never be enslav'd. This will be their great Security.
-Samuel Adams

It is certainly true that a popular government cannot flourish without virtue in the people.
-Richard Henry Lee

"Is there no virtue among us? If there be not, we are in a wretched situation. No theoretical checks -- no form of government can render us secure"
-James Madison

"...without virtue there can be no liberty, and liberty is the object and life of all republican governments.
-Benjamin Rush

What they knew is what Montesquieu wrote about: a republic requires a virtuous people to survive, just as a dictatorship requires fear. If the people are not virtuous, their power over government and their own destiny inevitably will end in misery and collapse. People can only be free as long as they are good.

Think about it: wicked, selfish, destructive, or criminal people will prey on others for their own pleasure and gain, resulting in less liberty for those they prey upon. If the people of a republic in general are wicked, then the general society will be one of less and less liberty.

The Founding Fathers understood that virtue leads to liberty and a recognition of a greater authority leads to smaller, more responsible government. Thus, the goals of libertarians and fiscal conservatives are the results of social conservatism. And the two sides ought to agree on the results.

Yet over time the desire to do whatever I want and face no negative consequences (called liberty and self determination) which libertarians desire cannot tolerate an absolute objective authority or the need for personal virtue. Any external force which brings pressure toward certain behavior and away from others is viewed as tyrannical and a loss of liberty. Dana Loesch puts it this way:

Without some higher goal and greater motivation than personal pleasure and safety, that's going to tend to be true. And in time, that split will become greater and greater.

But not until conservatism - or at least likelier agents of conservatism than the Democrats - gain power, the coalition will hold. Once that happens, who knows how long it will remain in place.
Posted by Christopher R Taylor at 9:54 AM