"The FBI saved our butts, no thanks to the city leaders." 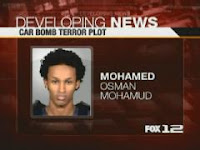 Last week I wrote about Portland, Oregon and the failed terrorist attack there in a FBI sting operation. In it I noted that this man was stopped despite the city's deliberate decision during the Bush administration to not work with federal authorities to fight terrorism, likely at least in part with the assumption that it wasn't going to happen in that city anyway.

Well there was an attempt, and despite the city's idiotic and childish refusal to help fight terror, it was prevented. At Victoria Taft former Multnomah County Sheriff, Gresham Police Chief and Oregon State Police officer, Bernie Giusto wrote an extensive blog entry on what it was like to work in the Portland police when the decision was made and the kind of politics that were involved. He writes:

Being Multnomah County Sheriff in 2005 when the City of Portland stranded the FBI and the rest of us in Oregon Law Enforcement on the local chapter of Joint Terrorism Task Force was a surreal experience in any number of ways. Initially it was hard to believe that the largest police force representing the economic, cultural and population powerhouse in Oregon would really leave the rest of us behind.

I took it personally as well.

Its not easy being part of an organization that's going nuts. You want to stay and do what you set out to do while the leadership spirals off in some idiotic direction. Do you stay and fight it out trying to repair their damage, or leave with the knowledge that you never would have made a difference anyway? Giusto stayed:

At the time Mayor Potter was asking for level of security clearance not available to any of the other police executives directly involved, including myself. Of course that would make the Mayor more special than the Sheriff. I thought, tell me it isn't so. But when he couldn't get a Top Double Secret security clearance he took his cops and went home.

The Sheriff's Office stayed for the greater capacity we added to the JTTF mission and out of a sense of pride it brought to the Sheriff's Office. We also had every confidence that our deputies would be the first to let us now if anyone's constitutional rights were being stepped on or the FBI was promoting Civil Right violations in their operations.

But when the Portland City Council literally voted themselves off the domestic terrorism intelligence gathering island, I was shocked back into the all-too-often Portland reality: Political posturing, regardless of how self centered, means the rest of us will be on our own even when it comes to our basic safety. Portland had in fact turned their back on the rest of us in law enforcement-- and worse-- on the long term safety interests of their citizens.

Portland, Oregon is one of the most leftist places in America, although less well known than cities like San Francisco. They threw a fit when President Bush had the audacity to win and be popular as a Republican and twisted themselves into all sorts of lunatic positions on the man and his intentions because he dared to be socially conservative.

Giusto says the FBI success is incredibly embarrassing for the Portland police, and he's confident that still most of the cops would gladly work with the federal government to fight terrorism, but most of the cops aren't in the leadership and the appointments by the hard left government of the city always are the most leftist and politically tricky men, not the best cops or people with the slightest connection to the men in blue.

At this time it looks like Portland might work with the Joint Terrorism Task Force once more - after all a Democrat is president now so its okay to work with the government again - but the police chief is hiding out from the press and nothing is begin said officially.

The problem is, the JTTF is damned either way. Their success allows detractors to say "see they didn't need us" and if they'd failed, the enemies would say "see, they were no good anyway." In fact, that's what Multnomah County commissioner Leonard is arguing. However, he used to be a Lieutenant in the Portland fire bureau and as Giusto points out:

Surely he would agree, then, that if the Tualatin Valley Fire District on the west and the Gresham Fire Department on the east could be relied on to protect Portland citizens and property, we don't need a Portland Fire Bureau. It doesn't matter, right? Mission Accomplished and all that.

And the attitude of these politicians is, he argues, the real terror in Portland: the failure of them to do their jobs to protect the people of the city for political reasons. All of their posturing was because of political opposition to President Bush and the presumption that, as an ideological enemy, everything he did must be tainted with great evil and hatred. Not only are those days past, but that was an infantile position to begin with.

When you are, in fact, the man, its idiotic to yell "damn the man."
Posted by Christopher R Taylor at 10:48 AM