The latest World of Warcraft expansion "Cataclysm" has been released, bringing new levels, two new races, a scattering of new high level zones, and more. I've been playing it a lot lately and overall its been a good product.

If you played WoW and gave it up because you started to get bored, Cataclysm is essentially a reboot of the entire old world with revamped zones, flight in the old world, rebuilt dungeons, quests, maps, items, and so on. Most of the new content is superior to the old in terms of entertainment and creativity and it takes significant advantage of the "phasing" techniques introduced in Northrend.

Phasing allows the game designers to let the world change and adapt to you as you do quests and accomplish goals. For example, the zone Redridge which has been plagued by orcs and gnolls for six years in the game can finally be cleared of these pests. You start out the zone fighting them, you finish the whole quest chain in the zone and they're all gone.
Some of the zones are largely unchanged such as Duskwood, but most have changed, some very dramatically. The ocean has filled in the entire Thousand Needles desert area, for example. The horde have taken complete control of Hillsbrad, for another.

The two new races are Worgen (were wolf types) and Goblins, for alliance and horde, respectively. The worgen can shift into human or werewolf form, and any time you're in combat you automatically shift to worgen as you become excited and angry. Goblins are crazy little tinkering goofballs that have a zany starting area and are lots of fun to play.

Worgen start out in a zone called Gilneas, and the voice acting (and voice emotes for players) are all British. The whole area has a dark faerie tale/gothic horror sort of feel to it, and it is a fairly dark and grim story as you move through your beginning levels. By the time you're done you have experienced a rough time that should bring a gleam to the hearts of any black-lipsticked player. 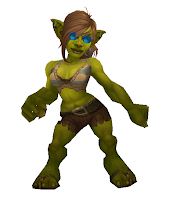 Goblins start out in a wild town filled with flashing lights and devices, and you spend much of the first few levels with a jalopy you drive around in with your buddies, playing music, beeping your horn, and running over fellow goblins who bounce around harmlessly and yell at you. As time goes on the goblin predilection for explosives causes several accidents which force you to move several times to different locations.

Both races start you out early in the Northrend expansion and time passes, finally introducing the Cataclysm caused by a vastly powerful dragon and elemental upheaval in the entire planet. When you finally finish the starting areas, around level 12-14, you will join the rest of the game caught up to the current time period depicted in the Cataclysm setting.

While the starting areas are creative and interesting, I have a few complaints about how they're set up. Because they run you through time and a series of phased events, no one from outside the starting areas can even see you until you're done. You cannot leave, and you are essentially railroaded through a series of events until you reach the end. I understand why; Gilneas was walled off and inaccessible to the rest of the world and these goblins were totally unknown until Cataclsym, so the designers are retrofitting them into the game. It wouldn't make sense for you to move back in time and visit Gilneas before the Cataclysm, for example.

However, this greatly limits your flexibility as a player, and it also makes the starting few levels for these classes lack in replayability. This is especially true of the worgen side, which frankly was depressing and not a lot of fun. I don't look forward to going through that again. And because you are shuffled from area to area so aggressively with no possibility of going back (phased), you can go 3-4 levels without training anything and have virtually no access to any trade skilling whatsoever. This can require you to go back to lower level areas and catch up once you can get into the bulk of the game.

However, the new races are interesting, and the stories are different and engaging while you go through them.

The new high level zones are well done, with a totally underwater area which was handled well (finally, these sort of zones are usually horrible - those who played Everquest and went through Kedge Keep understand what I mean). You can get a giant sea horse mount which you have to break before you can ride, a mount which screams through the water. The finally opened area of Uldum is frankly spectacular, it is the best looking, most breathtaking zone I've ever seen in any game period, let alone World of Warcraft.

The revamped dungeons are also well done. While some are almost untouched, such as Wailing Caverns, the great majority have been updated, and others were heavily rebuilt such as Sunken Temple (only half of it remains). The bulk of dungeon quests in the older dungeons are now inside, letting you catch up without having gone through all the outside areas to pick them up. Graveyards are much closer, cutting down on run-back time should you die, and many have been shortened or streamlined so they are quicker to go through.

Overall Cataclysm is a great success, but I just wish they'd handled the new races a bit differently. Every year our guild hosts a run around the world with level 1 characters. Typically we do gnaked gnomes, although we did a "running of the bulls" with Tauren once. We were planning on doing a goblin run this time, but its simply impossible to get a level 1 goblin out of the starting area.
Posted by Christopher R Taylor at 9:04 AM