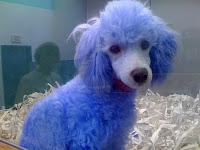 In the New Editor, Tom Elia noticed something in a New York Times article, a quote by President Obama in which he claims to be "essentially" a Blue Dog Democrat.

Blue Dogs are supposedly conservative Democrats, the kind of Democrat who doesn't go along with the radical wing of the party and its leadership. In 2006 and 2008 lots of these guys were elected in otherwise "red" states which tend to vote Republican. They ran on pretty conservative platforms such as anti-abortion, small government, lower taxes, a strong military, and so on. Some were Iraqi war vets. The term comes from the idea that they've been choked out of the party by the left wing.

The Blue Dogs presented themselves as a counter to the hard left leadership of the Democrats, they campaigned on being the ones who'd fight Reid and Pelosi's more radical schemes, and formed a coalition that repeatedly stated that was their goal.

When they actually got into office, they voted for every huge leftist scheme that came down the pike: the stimulus package, TARP, the Government Health Insurance Takeover Act, and so on. In practice, the Blue Dogs ended up being just another left leaning Democrat.

So yes, I believe President Obama when he says that he's one of them.
Posted by Christopher R Taylor at 8:35 AM