"This is pretty much business as usual"
-EPA's Gina McCarthy 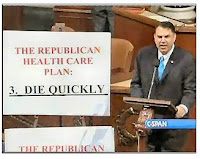 Despite Union-organized riots and violence, the French goverment signed into law an increase in the official retirement age, rising it from 60 to 62. In all honesty, these days it ought to be up to 72 or so, but good luck getting the French to sign on to that.

President Obama's deficit reduction commission produced their suggestions for how to fight the Obama-caused deficits: increase taxes, they say. The commission also suggests cuts in the military and other places, but almost all of the cuts are actually reductions in the amount of increase, or Government Cuts© which are not cuts at all. Its like saying you're going to spend 100 dollars on a new pair of shoes next time you buy some, then only spending $75, and calling that a cut in spending. They do this primarily by saying spending should stop at 2010 levels, which is already at a 15 trillion dollar deficit level of spending. Any real cuts have to cut spending back to before TARP at the very least.

Meanwhile Scott Withlock points out at Newsbusters how leftist and former Clinton advisor George Stephanopolis thinks that the commission's findings are brilliant and says that they "call the bluff" of people who believe the federal government must cut spending. People who want to cut spending are mocking the commission's faux cuts and utterly predictable suggestions of higher taxes and military cuts. Even some of the commission's membership rejected the final report.

Balanced budgets are on the mind of Dan Mitchell, who posted information from the Congressional Budget Office demonstrating that merely reducing the rate of increase in spending to 2% each year would result in a balanced budget within ten years, even assuming you don't raise taxes.

The United Nations continues its life-long quest to demonstrate it betrays every principle of its founding and backs thugs, dictators and human rights abusers while attacking democracies whenever possible. This time the organization has chosen Saudi Arabia to sit on the Women's Rights panel, rejecting Iran. Nice Deb carefully details the ways the Saudi government and culture routinely abuses, humiliates, and violates women.
Rachel is one of the more well known women from the Bible, a woman who was mother of many of the tribes of Israel and a famous beauty that Isaac worked for decades to win the hand of. Her tomb has been known about for millennia and archaeologists as well as historians have verified. Now, the United Nations Educational, Scientific, and Cultural Organization (UNESCO) has decided that the location is instead a mosque. This location has never served as a mosque for Muslims, and until 1996 no one even hinted that it be anything but Rachael's Tomb.

Defunding NPR has gotten a lot of fresh support lately after its ridiculous firing of Juan Williams for noting that conspicuously dressed Arabs make him nervous on airplanes. At first NPR claimed it gets almost no money from the federal government so there's no need to worry about defunding, but now its claiming it couldn't exist without the funding. As the Daily Caller notes, although its defenders claim absurdly that NPR is utterly unbiassed and neutral, the organization fighting defunding is a pack of leftists financed by George Soros.

Recently a study was done on "biofuels" which notes that the production of this allegedly green alternate fuel source is actually worse for the environment than ordinary gasoline. This study was produced by ActionAid, Birdlife International, ClientEarth, European Environment Bureau, FERN, Friends of the Earth Europe, Greenpeace, Transport & Environment, Wetlands International, all hard-left enviromentalist organizations. That means their conclusions presume AGW and future doom from human emissions, so their study is based on land being converted to farming production which is bad to them. Still, it shows how the support for this debacle is collapsing.

Democrats show almost no sign whatsoever that they have heard the people. Even Republicans figured out that people didn't like them in 2006, but Democrats are acting like they are loved, but that they didn't do a good enough job selling their ideas. The clearest indication of this is that they want to put exactly the same people into leadership positions. Newer Democrat congressmen are less than amused by the idea of Pelosi being still in leadership after being demolished in the 2010 elections under her gavel.

President Obama promised several times while running for office, then repeated the promise several times when elected that he'd post laws on his presidential website 48 hours before signing so people would have a chance to look at them and know what the law is. For most of the first year he managed to get one law posted, and over the next year, more were posted. Here's the final stats so far:

So he's sort of getting things posted, but just over 30%. This study by the Cato Institute takes into account "emergency" or classified legislation which wouldn't be posted anyway.

Palestinians are not known for their subtlety and mature thinking, but sometimes they do something that makes them look even worse than usual. This time an Arab boy who fell five floors from his home in El Azaria, and when the Israeli ambulance showed up, local Arabs threw rocks at the ambulance and the emergency workers trying to resuscitate the young boy. Who knows what they were thinking, perhaps it didn't go beyond "hurt the hated Jew," but these were neighbors of the Arabic family, so its not like they were unaware of the boy's heritage.

Obama's leadership skills are well known to be not just lacking but incomptetent by everyone. Warnings before the election went unheeded, but perhaps this will be a good object lesson. Still, nobody up to this point has suggested what Bob Kerrey, Mark L. Alderman and Howard Schweitzer did in the Washington Post: that someone take over his work and turn him into a figurehead.

Many Americans might consider the White House chief of staff among the most important jobs in Washington. But the chief of staff has very little statutory power over a federal enterprise that employs more than 4 million people, purchases more than half a trillion dollars each year in goods and services, and occupies more than 1 billion square feet of office space.

Instead, the president is left to manage these responsibilities through innumerable departments and agencies. Given the sheer size and cost of this enterprise, the federal government should borrow a page from the corporate world. The country's chief executive officer needs a chief operating officer to run the day-to-day government, to cut through budget battles, political fiefdoms, parochialism and inertia to assist the president in keeping this country moving. Let the president's chief of staff manage the White House - an enormous responsibility in itself. We need a chief operating officer to manage everything else.

Get that? Being president is hard, so we should put another person into the executive branch to do all the actual work of being executive so Obama won't have to. Because he sucks at it, having virtually no experience and apparently no natural ability as an executive. The contrast here is hilarious to behold. Bush did something wrong or mistaken = proof he's worthless and stupid. Obama isn't up to the job whatsoever = proof the job is too hard for any one man, we need a COO.

New regulations on nutritional information on every single piece of food sold at any level is going to cost a lot of money if they go through. The FDA its self admits that requiring Vending Machines to handle this work load will require fourteen million (14,000,000) man hours each year in addition to the usual expense. This is sure to not cost any jobs, quality, or business closures.

Oh, that's not all. Obama's favorite trick is to have the executive department do through regulation what he can't get congress to pass through law. The new pollution requirements the EPA has decided on will be immensely expensive for businesses.

Without the proper pollution permits, existing facilities and new construction projects across the country either will grind to a halt or never get started. The cost estimates are indeed staggering, according to an econometric study by the Manufacturers Alliance that projects more than 7.3 million lost jobs by 2020. The hardest-hit states include Texas, which would lose 1.7 million jobs, and Louisiana, with 938,000 positions lost. Others include California (846,000), Illinois (396,000) and Pennsylvania (351,000). Total losses would reduce the nation's gross domestic product by $1.7 trillion, according to the Manufacturers Alliance.

One of the most hilarious headlines I've ever read comes from David Cullum at The Hill:

I don't know if they were being deliberately sarcastic or they just didn't quite catch that hypocrisy. Lately Obama has begun to budge on tax cuts, however.

Another headline from The Hill that deserves notice is this one:

Gibbs: GOP efforts to repeal healthcare won't get past Senate

Really? The Republican Party wants to repeal HEALTH CARE? They want to ban medical care of all kinds in America, they want to pass a law repealing the very concept of health care? Seriously? Look I know Gibbs is an unlikable grinning *&@#stain, but nobody held a gun to Sam Youngman's head and forced him to word it that way, because its not a direct quote.

I'd like to see you do a little more analysis on the debt commission proposals... I think conservatives are being way too dismissive and missing an opportunity to engage OBama on debt reduction and hold his toes to the fire. Here's some of the basics I've read, that I could get behind IF they were all done together (I'd be willing to take some tax increases if they were coupled with the types of serious cuts mentioned here):

- Cut spending on overseas bases and freeze noncombat salaries in the military, and also make the $28 Billion in cuts proposed by Defense Secretary Gates.

- Cut or privatize federal spending on things like having Army Corp of Engineers dredge up sand for public beaches, and the Billion dollars a year we spend on a National Zoo program... make nature and history enthusiasts to pay money to access national parks and musuems.

- Cut the $5.2 Billion we spend on federal non-military travel, most of this can be done via teleconfrencing. There is another $4 Billion that is spent on maintaining federal vehichles, cut the first and you also cut the second.

- Cut $1.2 Billion of NASA funding that is used to subsidize development of private space flight.

- Lower income taxes and abolish the Alternative Minimum Tax (which unfairly punishes wealth creation), but also remove some tax breaks that try to incentivize certain behaviors, such as the home mortgage interest deduction (which, while well intentioned, undoubtedly contributed to the housing bubbble)

I think there's a lot of money that could be saved by cuts in the military and indeed elsewhere, but the basic proposals of the commission (stop spending more than 2010 and increase taxes) suck.

Basically nobody likes what they came up with and no one is surprised with what they propose.