On a Sunday morning sidewalk
I'm wishing Lord that I was stoned
'Cause there's something in a Sunday
That makes a body feel alone.
And there's nothin' short of dyin'
That's half as lonesome as the sound
Of a sleepin' city sidewalk
And Sunday mornin' comin' down.
-Kris Kristofferson, "Sunday Morning Comin' Down" 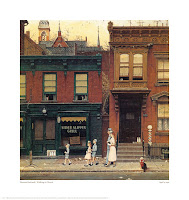 Most folks these days seem unaware that Sunday is, in fact, the beginning of the week, not the end. A quick glimpse at a calendar confirms this fact, although you can buy calendars these days which show Monday as the first day of the week. There was a time, a few decades ago, when Sunday was the day the town shut down, a feature you can still see in some small rural communities. Stores were shut, people had the day off.

Some shreds of that older tradition are still around; banks and Post Offices are closed on Sundays, for example. The origins of this were religious, based on Christian "blue laws" requiring a day of rest. Further back is the ten commandments, one of which states:

And remember that thou wast a servant in the land of Egypt, and that the LORD thy God brought thee out thence through a mighty hand and by a stretched out arm: therefore the LORD thy God commanded thee to keep the sabbath .
-Deuteronomy 5: 14-15 (KJV)

Jews have long kept this, even stretching into the 21st century. The Sabbath Day is observed from sundown Friday to sundown Saturday, and it is treated differently. Many Christians still observe Sunday as the sabbath day, doing less work and honoring one day a week as they believe was commanded by God. One famous example of this observation is from the movie Chariots of Fire, in which Scottish Presbyterian Eric Liddell refuses to race on Sunday, forfeiting a medal.

Culturally, this meant that cities and towns across America used to also take Sunday off. Most stores were closed, only emergency services were available and people would take the day off even if they didn't go to church. As the relentless drive for profit and demand for service continued to build in the late 20th century, that tradition gave way, and few stores close on Sunday any longer.
In Europe, you'll still find many places closed on Sunday. The religious connections have long been abandoned, but the tradition still holds. A day off from normal commerce and a reliable day of rest is considered so valuable that the tradition endures through atheist and humanist governments and cultural trends.

The truth is, we are all better off for a day of rest. Even the hardest working, most ambitious of us need time off once in a while, and the 40-day work week presumes 2 days of rest a week, although in some service industries this can be rare. In a society which praises productivity above almost all other virtues, the idea of a day off together seems almost heretical but the truth is, there are great benefits to having such a time.

Having one shared, community day off means that that community has a common experience and a day when events and experiences can be expected or planned. One day of regular expected rest means that people know in advance when they will be free, and know when they can look forward to rest.

Having that one day predictably waiting for you for rest and a break from the stress of work, school, and other daily activities means a time when you can give your body a break and take the time we as humans need to recover from our daily grind. Starting the week with this day means a fresh work week faced with a recovered mind and body.

It has been long known that relationships thrive better when they have regular, predictable times of leisure and togetherness, such as families or marriages. So too friendships, teams, and other relationships benefit from this predictable time. A day together without the stress of work or the burden of the clock demanding our actions means a day of healing and relaxation together, something American culture sorely lacks.

America has too long has suffered a relentless push to divide us into little gatherings and identity groups separate from each other, and a shared time off would tend to bring us as a nation together rather than push us apart as so many pressures of our day tend to do.

So perhaps the Sunday Off movement, which is small but gathering momentum around the world, is an idea whose time has come. America could use a break once a week, and certainly the nation wouldn't suffer from a little less commerce once in a while.

This was originally posted on RightNetwork
Posted by Christopher R Taylor at 9:04 AM