"The west is good country for men and dogs but its mighty tough on women and oxen." 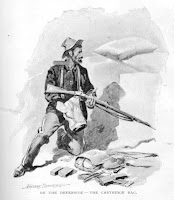 Whenever you get a group of working men together in a difficult situation you're sure to get a few things. One is a lot of impressive work done, another is some really great humor that doesn't share well in mixed company, and another is wisdom that comes from experience.

Over the years, that wisdom gets pared down to little snippets, sayings and parables that people repeat because they are well stated. Who said them first and where they originated is lost and unimportant, all that matters is their weight and truth.

The old west was one of those times and places, where cowboys, cavalry men, and other frontiersmen gathered, worked, fought, lived, and died all sharing wisdom and thoughts. I have a book called Savvy Sayin's that I mentioned a few years ago, and its time to bust out a few more of these frontier-wrought parables once more. 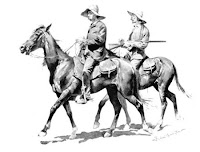 A year of nursin' don't equal a day of sweetheart

Silence can be a speech

Never approach a bull from the front, a horse from the rear, or a fool from any direction

Its hard to put a foot in a shut mouth

Stay shy of a man who's all gurgle 'n' no guts

When a cowboy's too old to be a bad example, he hands out good advice

An over-polite man is hidin' some mighty unpolite ideas

A corkscrew never pulled no one out of a hole

Its safer to have a good enemy than a bad friend

There's many more of these in the book. Its compiled from a lot of sources, such as the Old West Almanac, things that were once better-known and full of the kind of wisdom that only comes from hard experience. I've got plenty more that will show up here over time.
Posted by Christopher R Taylor at 8:38 AM

"The shallower the stream, the louder the babgble."

"Better to have loved and lost than to marry a pig farmer."

"You can't blame a worm for not wanting to go fishing."

"Never corner something that's meaner than you."

"Life is simpler when you plow around the stumps."