"The powers delegated by the proposed Constitution to the federal government are few and defined. Those which are to remain in the State governments are numerous and indefinite."
-James Madison 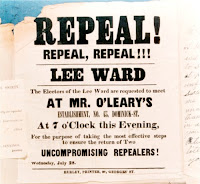 Its been a long time since anyone has seriously tried to amend the US Constitution. The last attempt was a feminist fossil called the "Equal Rights Amendment" which was not only superfluous but would have codified identity groups nationwide.

There is an attempt now to get amend the constitution, Randy Barnett's "Repeal" amendment. The gist of this is that any federal law can be repealed by a majority vote of state legislatures. I'm ambivalent about this concept.

In one sense I like the shift of power to the states, which has been for over a century far too much in favor of the federal government. The Civil War sort of put a stake in the heart of state sovereignty and ushered in the era of big central government, an anathema to the founding fathers. It was one of those really unfortunate side effects of a noble effort, one which we still suffer from today.

The concept of "federalism" in which the federal government is small and functions only to act between individual states and with other nations would be enhanced by this legislation. At least according to the federalist and anti-federalist papers both, it appears clear to me that this is more the way the founding fathers intended America to work.

Yet at the same time I can't see this really achieving anything, and I'm extremely nervous about amending the constitution. Most of the amendments are good, but some have been very problematic, while some were well intended but were not very carefully thought out (the 14th amendment, for example).

Each time the US Constitution is amended it is very difficult to change that, on purpose. That means any change made must be for very good reasons with very clear intent, and very specific need. I don't see that being true with this amendment. Its clear enough, but is it really needed?

And how often does anyone really believe that state legislatures are likely to overrule the federal government? Most state legislators have eyes on the US congress, and they can only get there through the good graces and assistance of the sitting congressmen and party budgets. Annoying people in congress won't help with that, so it seems likely that the pressure will be to not overturn anything, even if there's the will to do so.

Further, given that legislatures at the state and federal level tend to follow the same national mood, there's not likely to be significant disagreement between the two groups - not significant enough to drum up a majority vote nationwide to overrule congress, at least.

So I'm not sure about this one, and I'm not really confident it has any chance of passage. It has to get through the US congress, who would have their powers specifically weakened by its passage, which seems unlikely given the nature of politicians.
Posted by Christopher R Taylor at 8:05 AM