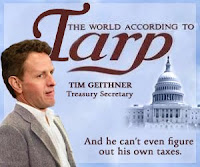 QE2 isn't the new Queen Elizabeth oceanliner, its Quantitative Easing 2. This is when a country's central bank buys commodities to inject the economy with money, in an attempt to stimulate growth. The reason its being called QE2 is that Quantitative Easing was tried once before.

This time its the US Federal Reserve, and Timothy "Turbo Tax" Geithner is trying to stimulate the economy by QE2. They're doing two things:
TARP by law is only supposed to be used to rescue banks from collapse, but that's not going to stop them from spending this money to throw cash at AIG and so on. They tried this once before, and Rush Limbaugh explains why it didn't have any positive effect on the economy:

Now, the past stimulus money, previous, went to commercial banks, investment banks, Wall Street firms who have not lent the money, which we predicted. We predicted when TARP came they're not going to lend the money, they're not gonna redistribute, they're going to shore up their own accounts, they're gonna shore up their own bottom line, they're gonna keep it, which they did. They have not lent the money to business and consumers as planned. The money has not been used to spend on new projects or on hiring people or creating growth.

I mean interest rates are practically zero. They're getting money for nothing. I mean it's almost as though they're being given money. That's how low interest rates are for these transactions. And they have used this zero-cost money to buy and trade Treasury securities or other financial instruments and made money on the differential. It doesn't cost them anything to get money, they invest it, they get a big return on it. Why would they lend it? Why would they put it out there at risk to somebody who may not be able to pay it back when they can invest it and shore up their own bottom lines, which is what's happened. The money is being printed, it is being invested to banks and firms and Wall Street firms and it's stopping with them. It's not circulating.

Why does the Obama administration want to try this now? I believe they hope that it will actually work this time because businesses are showing some signs that they are less uncertain and more willing to take risks like hiring and expansion. If this happens, they'll want loans and the lending institutions will have the cash to make those loans.

Why businesses are starting to look a bit less bleak is not exactly clear but it isn't hard to guess. Geoff posted this chart and explanation on Ace of Spades HQ which helps understand the shift:

What you're looking at is the improvement in initial unemployment claims vs. the prediction of GOP seat gains in the House. As you see, the improvement in initial unemployment claims was approaching zero, but in mid-August things started improving again. The remarkable thing is that this was just after pundits started predicting that the GOP would take control of the House.

To put it simply, with Democrats not in total control of congress, there's less uncertainty. Republicans are a lot more reliably friendly to businesses large and small, and are much less likely to let things like the Government Health Insurance Takeover Act pass or let the vast tax increase due to take effect in January 2011 occur.

Democrats aren't usually as business savvy as Republicans, and in particular Democrat Presidents are not. Here's another graphic, this time courtesy Forbes (linked in Geoff's above article). 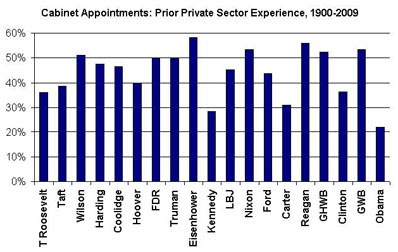 Democrats like Kennedy, Carter, Clinton, and Obama (the three Democrat presidents in the last 40 years) tend to rely on academics, career politicians, and beltway insiders for their advisers and helpers significantly more than Republicans. As a result they get theoretical and political ideas of what should be done and how things work more than practical experience and knowledge. In theory Quantitative Easing works, on paper: you give money to lenders, they lend, the economy grows, matching the value of the money printed, so there's no devaluing of currency and inflation is controlled.

In practice, what happens is that there are too many other factors such as recently when businesses just weren't willing to take risks because they saw Democrats piling more and more costs and who knows what was going to happen next or a year or five years down the road.

Businesses cannot work day-to-day, they have to work for the future, especially when it comes to investment and expansion. Few if any businesses have cash lying around to make major expansions or hirings, so they rely on future earnings and loans to cover the costs, hoping that they'll do well enough in the future to pay for these expenses. Its gambling of a sort, although significantly more reliable and predictable gambling than the slots.

With a business hostile government increasing costs, reducing future certainty and earnings, and continuously complicating matters, businesses just weren't willing to take any chances. The had the money on hand for some expansion and hiring but not enough to do so for very long, and thus they sat and waited. Once it appeared that business-hostile climate was likely to come to an end, they started taking a few more chances.

Whether Republicans will be reliably business friendly or not remains to be seen, as does whether the Obama administration will use executive orders and agency rules to implement his business-hostile ideas instead of going through congress. He's done that a lot lately, especially with the EPA, and while some have been blocked by courts, some go through. Republicans do not have the votes in the Senate to force laws through to block these kinds of activities, so its again largely up to the Democrats.

Will they understand that you cannot be hostile toward businesses and treat them as enemies while hoping for any economic recovery, or will they continue the insane drive toward socialism and destruction of American business, resulting in worse economic conditions? Right now, the stock market is spiking because they're going to get some of that sweet free money from QE2, but that doesn't mean things are suddenly going well. They spiked last time too.
Posted by Christopher R Taylor at 10:14 AM