"Ned looks like the love child of Steve Buscemi and the Taco Bell chihuahua." 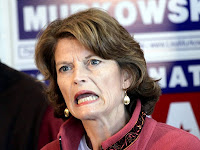 A few of the election results last night were very dismaying for me to learn. Democrat Harry Reid, for example, the miserable wretch who is the Senate Majority Leader, won reelection. If there ever was a poster boy for an incumbent who must be removed from office it was Reid. Nevadans admit in polls they hate the guy, but he still won? Either something fishy is going on with the election down there (supported by a few shady or outright illegal events in the past few days) or the polls are junk.

Another poster boy for anti-incumbency is the most corrupt and loathsome congressman alive today, Barney Frank. He won reelection too, despite a nearly continual series of lies from the man and scandals in his personal life, from a live-in lover prostitute to pot being grown in his home that he supposedly didn't recognize.

Yet the most significant reelection in this cycle to me is Murkowski in Alaska. Murkowski is one of the most perfect examples of a tone deaf, arrogant, corrupt, and contemptuous Senator, someone so filled with the certainty of their entitlement to power they don't even bother to hide it. She was defeated in the Republican primary by Joe Miller, a weak and questionable candidate who still was strong enough to easily defeat the Democratic Party opposition.

Sarah Palin was very significant in Murkowski's defeat and with the sitting Senator out of office, it would be a clean sweep of the old corrupt Republican guard from Alaska thanks significantly to Sarah Palin's efforts. Murkowski refused to admit defeat, said the other Senators all wanted her back, and went into the campaign as a write-in independent.

Murkowski is incredibly rich and powerful in Alaska, and she used that wealth - earned on the backs of Americans while in office - to campaign. At first, the Republican National Committee looked like it was going to help her but then went through the motions of helping Miller. Its hard to avoid the sense that they helped Murkowski behind the scenes, however. When an Alaskan radio personality suggested that as many people as possible sign up to be write in candidates to make Murkowski's effort harder, she sued the station and got him fired.

Yet, despite this, she won. And I cannot help but flash back a few years to another previous election in which a party candidate was defeated in the primary election then came back to win as an independent. That time it was a Democrat named Joe Lieberman.
7
The election in Connecticut was a special project for leftist radicals, led by Markos Zuniga who saw Lieberman as a horrendous traitor for having the audacity to support US troops, the effort to liberate and rebuild Iraq, and fight terrorism. The "netroots" effort resulted in Lieberman's defeat by a pathetic trust fund activist named Ned Lamont. Yet when the general election took place, Lieberman kept running and won as an "Independent Democrat."

The parallels are pretty significant here. You had an independent figure working to promote their political ideology. They have an initial victory, followed by a loss to the sitting candidate who is more moderate. The biggest difference between the two is that the Democratic Party leadership made their hatred for Lieberman absolutely clear, but the Republican Party leadership supported Murkowski.

So is Palin nothing more than the right wing's version of Kos? Loud, great at raising money and motivating the troops, but not terribly effective politically? Sarah Palin has had some significant victories - far more than Kos, who's record at electing politicians is pretty awful - but in the end, she wasn't able to even get her own state behind her cause.

Look, I like a lot of what Sarah Palin says, and I think she's a fascinating, charismatic voice for conservatism. I believe she'll be a valuable force in the coming years as we fight to bring America back, but I just don't see her as the second coming of Reagan and as I've said before I don't want her to run for president.
Posted by Christopher R Taylor at 8:54 AM

I agree with you on Palin, but I think she is going to run. I also think Newt is going to run. I fear the combination of those two being in the primary could end up giving us a Mitt Romney nomination (although Pawlenty could conceivably win it even with those two in the race... Pawlenty is a little more moderate than I'd like, but not catastrophically so, and I think he is the most conservative candidate in the hunt right now who is electable against Obama).

The important lesson that I take away from the Tea Party's effectiveness is that even if people are sick to death of the person in charge, they are very cautious about voting for somebody who is perceived as a kook. Angle and McDonnell and Miller were all very weak candidates. Miller's problem was mostly image, I think, but Angle and McDonnel both displayed an alarming lack of ability to explain and defend their views. Especially McDonnell, who routinely had to rely on conservative blogs and Fox News to explain her positions for her. That is never going to work.

Rand Paul is the Tea Party victor I am most excited about, and even though I question some of his judgment in dealing with the media, he gets an A+ for intelligbly explaining and defending his positions in a way that didn't make him sound like a nut, even though the media tried hard to portray him that way. I think he showed the template for how you can make it work (speak intelligently and without a lot of dramatic flair, focus like a razor on spending and size-of-governmetn, and don't be afraid to challenge conventional wisdom, even if it is the conventional wisdom of your side (Paul refused to endorse the GOP's 'Pledge To America' because it didn't put defense spending on the table).

Look at the bright side. Reid is now the leader of a much-reduced Senate. He has to keep at least 50 of them in line (Biden provides the deciding vote).

Reid's proven himself to be relatively inept and he's still the leader. Which is much better than having Chuckie Schumer. Of course, Sen. Schumer could force the issue...