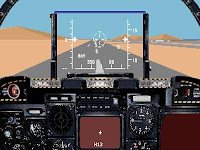 I wish I had a cheap, old computer around sometimes. Just some old 486 processor with windows 95 on it, something I could use to run old games with a joystick. I miss a lot of those old games, even though their graphics weren't as pretty as now. Back when you had only a few 4 3½" floppies to put a game on, programmers were a lot more efficient and careful with the game than they are today. Today's games may look and sound amazing, but often the game play is a fraction what it once was.

I loved Populous, for example. It was the first "god game" where you controlled everything and in this case literally played a god who relied on worshiper power to affect the game setting. You can't run it on modern machines without special programs like Dosbox to slow things down to a playable level.

Other games like Heroes of Might and Magic I still play. I didn't care for IV and V, they seemed to have lost the whole idea of the game. HOMM 4 looked like a game someone made after hearing a few people talk about the original, and 5's 3D up close perspective kind of ruins the large-scale feel and concept of the game.

I miss Wing Commander, too. I was really good at that game, and it was a very fine offering that graphics aside would stand the test of time still. They simply don't make games like that any more. Another fun game was Mechwarrior, although the missions got absurdly difficult and ridiculous in concept. OK take your battered barely-equipped mech and fight those five more powerful ones. This was the best joystick game out there, taking advantage of new technology to let you twist the turret while moving forward. I'm not sure they even make joystick games any longer.

One of the best flight sims I ever played was called Chuck Yeager's Air Combat; Mr Yeager himself did the voice overs, and it was a fascinating concept. You followed Yeager's career over three wars and replayed dozens of the most famous and impressive dogfights in history with P-51s to Sabres. It was the first game to have you black out from excessive G forces and have lens flare from the sun. It was a joystick game again.

Another flight sim I really miss was A-10 Tank Killer. That was an awesome game, it made me fall in love with the A-10. Like most of these games you were insanely over responsible: you had to come back flawless or get chewed out and ever mission put you up against half the world's army but it was truly a wonderful game. On the Amiga that main gun (the GAU-8 Avenger) sounded like the world was ending. Again: joystick, especially with a separate stick to control your flaps and airspeed.

There are a lot of old games we're hanging on to that simply won't run on modern machines any longer. They are like relics of our younger days, remembering the fun they gave us. Even simple, silly games like Worms were a lot of fun, with not a lot of memory use. Maybe I'll get some old system built one of these days, but where would I put it?
Posted by Christopher R Taylor at 8:22 AM

I never played Yeager's Air Combat, but I did put in many hours on the Commodore 64 with its predecessor, "Chuck Yeager's Advanced Flight Simulator". No combat, but a ton of different planes to fly with varying handling characteristics. And you could take the SR71 Blackbird to the upper part of the stratosphere and see stars during the daytime, which was always cool until she stalled and made you spend the next 3 minutes trying to recover as your altimiter dropped steadily from 90,000 feet to zero... then Chuck would pop on the screen w/ some smartass comment... "You sure bought the farm on that one, pard."

Some of my other favorite Commodore 64 games:

F-15 Strike Eagle - One of Microprose's many air combat games, this was always my favorite. I used to sit in my room wearing ski goggles and a construction site hard-hat (my flight helmet), spending hours dropping bombs on Omar Quadaffi and knocking dowon his MiGs.

Below The Root - Based on a series of books by Zilpha Keatley Snider, this was the first (graphic based) game I ever played where you interacted with a deeply thought-out fantasy world rich with its own rules and culture. I was hooked on fantasy books and games for years after playing this.

Adventure Construction Set: Allowed you to easily build multi-level graphic dungeons with monsters, traps, and puzzles. Then you could play through them w/ a fighter.

And of course there were the Zork games, but you've already posted about those.

I'm sure there are a ton of others I am fogetting, but those were the ones I probably spend the most time on.

Battle of Britain was an awesome game I remember playing when computers were relatively 'new'.

The scenarios started with you in an Allied bomber, just crossing into German airspace. You had to locate the target, bomb it, dodge the flack, and then set the autopilot for home and endure the relentless attacks from German fighters by hopping from gun station to station, firing back, and hoping you didn't run out of ammo before you got all the way across the Channel.

Another interesting flight sim was Secret Weapons of the Luftwaffe, let you fly a ME 262 and lesser known experimental craft like the YB-49. That one has long distance bombing runs too, you had to worry about running out of fuel before you got home.

M1A1 Tank Command - graphics were 'eh' but it was a great tactical game.

You don't need an old PC to play these games again, just get DOSBox. It runs virtually all old DOS games perfectly!