You can check out any time you like
But you can never leave
-Eagles, "Hotel California"

Living in Salem, Oregon means that you are largely unknown to the world, and we kind of like it that way. The one claim to fame that we have is the mental hospital that was used to film One Flew Over the Cuckoo's Nest, which is dubious at best. The drive past that mental hospital is one I've been on many times, and while it is otherwise a beautiful drive through some very nice neighborhoods and wooded areas, the hospital is like something out of a Cthulhu novel. It is very old and institutional looking, and just reeks of misery and horror.

They're tearing that thing down now, rebuilding it with all the latest and newest mental patient theories. Which is basically how they built it in the first place: using all the latest theories on psychiatric care like shock therapy and happy pills. The building looked like a ghastly prison with barred windows and no decorations, it was bleak and fearsome.

The new one will have "familiar surroundings" as Jonathan Cooper at the Associated Press explains:

In its place is a hospital designed to facilitate modern theories in mental health treatment, trying to mimic as much as possible daily life outside the institution. One area resembles a city’s downtown and will allow patients to wander between a store, post office, bank, hair salon, gymnasium and library, along with classrooms, an art therapy room and group activity rooms.

Group treatment rooms are smaller so health providers have a manageable number of patients. Six acres of outdoor space will give patients more access to fresh air.

The book Cuckoo's Nest was written by a Californian about a mythical mental institution, but the Salem one had enough stories of terrible things through its history to qualify. 40% of the building was unlivable, and it was packed with goodies like rats, asbestos, and probably a lot of really terrifying ghosts. 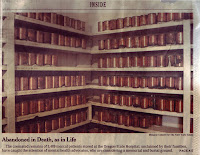 The cremated remains of 3,600 patients were stored in the place, discovered in 2004. No one came by to pick them up, so they were just kept on shelves in a really awful looking room. The remains were donated to a company who is turning them into diamonds; one diamond per patient.

Somehow, I doubt the new place will be any happier, or that relatives of the miserable lunatics incarcerated there will be any more likely to visit. But it might look less ghastly as you drive by, and since Salem only has a few east-west corridors to drive by, Center Street gets a lot of traffic.
Posted by Christopher R Taylor at 9:10 AM

Wasn't that written by Ken Kesey? I think he lives in or around Eugene here in Oregon.

Yeah he wrote it based on some experiences while working in a loony bin in Southern California, but I think he lives in Oregon.

Merry Christmas! Let the new year will bring a lot of money

I think about add this material in my RSS. Do u think its ok?

Zhirinovsky proposes to convene the UN Security Council on the Turkish-Iraqi issue
In Krasnoyarsk, in the artificial lake drowned car. Four people were killed
Victims of terrorist attacks on Dubrovka remembered the citizens of many countries


Georgia's economy could suffer a conflict with Russia

Ignatieff: In the banking sector rather subtle lack of liquidity

My point of view partially coincided with yours. Thank you for trying.