"Gerrymandering is well and god but it carries a two-edged sword. " 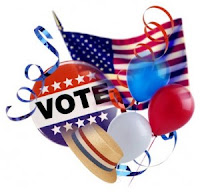 I want to take the opportunity of having a (very small) bully pulpit here with my own blog to push something that's not being adequately noted elsewhere. We've been told over and over again by both sides that this latest election was "historic," a "tsunami," a huge victory for the Republican Party and so on. Yet when you look more closely at the actual events, that just isn't true at the national level.

See, the national level elections weren't that impressive. Sure they look that way in terms of total numbers, and it is historic in the sense of being such a quick turnaround for the Democrats, but few of the House pickups were new GOP seats; most of them were strong GOP areas before 2006 when Democrats ran on being more conservative than the Republicans. Those "Blue Dogs" lost their seats back to Republicans when they failed to follow through.

In 2008, no Democrat lost a seat. Not one. In 2010 around several Republicans lost seats such as Mike Castle in Delaware. 255 Democrats won House seats in 2008. In 2010, 240 Republicans won house seats, and several key Democrats won reelection. That's less impressive by anyone's standards.

So this wasn't a historical masterpiece like people say it was at the national level. But at the local level, its a different story. Republicans now hold more legislative seats in the states than at any point since the reconstruction. Republicans took a bunch of governor seats as well, including some that have long been Democrat positions.

That means the GOP is in the driver's seat for redistricting, and for judges and a dozen other little things that make up the flow of the nation politically and socially for years to come. That's where it was historical, and that's where the Tea Party won; as well it should. Tea Party is about grass roots local changes which develop into national ones.

The Democrats were all about national changes because they think top-down. They're wrong. You change things at the ground up, and the national leadership follows from there. It takes longer and the fight is harder because you have to watch the opposition gain ground and do things you fear will be impossible to reverse, but in the end its a more solid, sure, and enduring victory.

Now if only we could obliterate Gerrymandering entirely.
Posted by Christopher R Taylor at 8:15 AM

Take the countryside, then the capitol.