"In the words of my generation, UP YOURS!"
-Independence Day 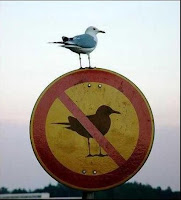 I don't like to do this much, and certainly not to a blog I really like, but there's some aspects of a post by Enoch Root on Piece of Work in Progress which I had to respond to in greater detail. He writes about the principle of defying authority and the need to not simply obey when you're told something by someone in power. That's part of what the United States was founded on, and like most Americans I'm at least part rebel at heart.

The problem I had was an example he gave of defiance:

A certain 13 year old I know is quite good at math. In fact, she is spookily good at it. It’s a borderline Rainman sort of aptitude.

The child persisted in using pen. The teacher called a conference with the parents. The parents thought it was a funny situation. Unnecessary? Maybe. Good for this particular teacher? Absolutely.

Now, like I said, I'm all for defiance, especially against arbitrary or foolish rules. And I don't know everything about this situation. Maybe the teacher is absurd and tyrannical. Maybe the parents handled it well. But when I read this, I had to disagree with Enoch Root here.

The parents should, unless there's extremely good reason, always back the teacher's rules. There's more at stake here than your child's independence or the way you view authority. There are times to fight the man and times to not, and a child's growth is the wrong hill to die on. Let me tell you a little story about a teacher and a child in response.

The child was me, and I was told in 1st grade by the teacher that we were going to do a little project. We had a rocket ship to color and then we were going to cut it out. Well my little fevered brain instantly reasoned that if we're cutting it out, it didn't matter how closely I kept within the lines, so I did a quick scrawl. The teacher came by and told me I did it wrong because we should color within the lines. I pointed out my logic, which the teacher thought was charming but she told me exactly the right answer:

The point of the exercise was to learn to follow directions, not to produce a nice looking rocket.

And I needed to learn to follow directions first, because I was a little boy. The same thing was true in learning to play the piano. My mom pointed out that I had to learn all the rules first before I could start breaking them.
See, the point here isn't that the teacher is necessarily right - although in this case he or she is; no matter how good any of us are at anything we will make mistakes. Always. The rule against using pen isn't out of some demented anti-pen fixation but the need to keep the page clean and make sure its neat and readable.

Wherever possible, children should follow the rules given them by authorities, no matter how silly they seem to the kid, unless they're being told to do something unethical. Allow me to summarize:
Kids need to learn to obey authorities and understand the rules and structures of society before they learn to disobey them. The default should be for treating authorities with respect and submission first, then you can learn as you become more wise and understanding to discern between frivolous and necessary.

Children cannot make these kinds of decisions properly, they have to learn the tools of society and mature to the point they can make these choices first before they start to make them. Doing so too early leaves kids with no proper respect for authority and ill equips them to face life. Every job is going to force them to do things they think are stupid or wrong or weird, and they will have to do it or look for another job. Usually there are good reasons for many of these rules, even if we don't know them to begin with.

It's important for parents to form a strong union with teachers and other authorities in a child's life so that the child grows up understanding that they are working together and to learn to recognize authority and respect it. Failing to do so raises rebels without a clue, people who at a whim decide the hell with what you say, not because there's good reason but because they just don't care to do it.

Its probably not easy to do this, but kids need to be told things sometimes simply because you say so. They don't need to know why not to do some things when they are very young, just that you tell them not to. They need to grow up understanding that some things you only learn and can truly realize through experience, wisdom, and maturity. The more they understand and agree with that the easier it will be for parents and the better it will be for kids.

Failing to do so gives us the generation we have now that's been raised to tell authority to go to hell for any old reason, presuming that since they're young and the future, they know best.

Obviously you can go too far with this, and obviously as the child ages, they need to have things explained more to them. Its clear that you cannot always stand with authority, and kids need to have a voice in having their say as well. The point isn't to silence children into mindless automatons, but to develop in them a proper respect for authority in their lives which everyone, no matter who, always has to deal with. It is an essential life skill.

In past generations (way past) the pendulum was too far in the "obey authorities" side. Now its swung way too far in the "defy authority" side, to our detriment.
Posted by Christopher R Taylor at 11:05 AM

The "rules of civilization" are the hardest to learn. They often seem arbitrary -- we drive on the right-hand side of the street -- and even though backed by a solid reason -- because Napoleon didn't like the British, and the Brits drive on the left because they held swords in their right-hands and, on horseback, riding on the left let's you slash your adversary [phew!] -- sometimes that explanation takes too long to espouse for safety's sake.
But a few explanations for such apparently arbitrary choices will show the child that there are deep reasons, and that while trivial in many cases, there *are* reasons.
Sometimes, they will the simply accept the apparent arbitrariness.
Explain when you can.

It all makes good sense until one has a senseless teacher. I have had to deal with several of those in my sons' lives.

Sure, and when an authority is absurd, you have to adjust but the default should always be to support them and defend them unless given good reason not to, rather than the other way around.

I think the story you describe here is an excellent description of one of the biggest problems of modern education: one size fits all. It is quite apparent that a kid who never makes mistakes on his math homework doesn't need to do that homework with a pencil, since the point of doing it in pencil is to be able to correct your mistakes. But you get into a tricky situation when you let one kid slide on this rule, because it then becomes unfair to hold all the other kids to it.

To me, it seems like a stupid thing for a teacher to make an issue out of, but as a parent I must admit if my daugther never made math mistakes (if only!) and her teacher told her to use a pencil instead of a pen, I'd tell my daughter to comply with the teacher's rules (probably followed with a word about how life is full of retarded rules that you sometimes have to follow).