"I've been around a few years. Surely you must have heard of me."
Captain America is one of the most iconic comic book characters ever created. There were a lot of patriotic heroesin the comics during WW2 but few of them survived and none gained the notice of Captain America. He was fairly popular during the war in Timely comics, but it wasn't until he was thawed out by Stan Lee and added to the roster of the mighty Avengers in the 1960s that Cap really became a major hero.

Captain America's story and his actions always have been interesting to me, an almost-plausible hero with an origin that is not inconceivable in the near future: a skinny, sickly boy who is given a massive physique through chemistry and radiation. He's not exactly superhuman, but more the theoretical limits of human physical ability. He doesn't have a jet pack or armor, he's got a shield made of special alloys. Captain America, like Batman, gets by more on his personality, ingenuity, and amazing skills than awesome powers.

Today, Captain America serves as Marvel Comics' wise elder, he's the one every single hero looks up to and admires. He's like Superman in DC, the hero all heroes wish they could be. He's always just, right, and unswerving in his commitment to right and liberty. He's a natural, flawless leader with all the right instincts and tactics. It took me a while to understand why people admired him so much, but a run by a few really talented writers in the Captain America comic such as Mark Waid really sealed the character's identity and reputation for me.

The Captain America movie is coming out in 2011, and it wisely has most of its action set in WW2, to help establish the character in his proper setting. Recently Entertainment Weekly ran a few pictures on their site in a slide show, giving a preview of the upcoming film: 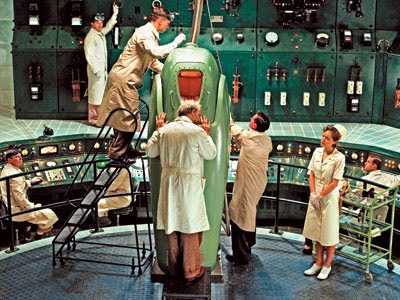 The lab where Dr Abraham Erskine transforms Steve Rogers from a 90 pound washout to a hero. 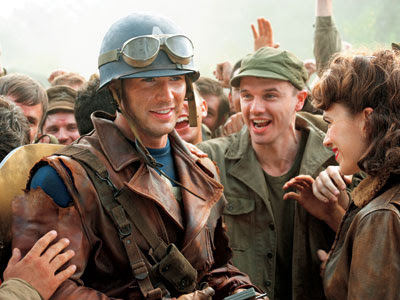 Cap and some fans, looking very period. And yes, Captain America is a captain in the US Army. 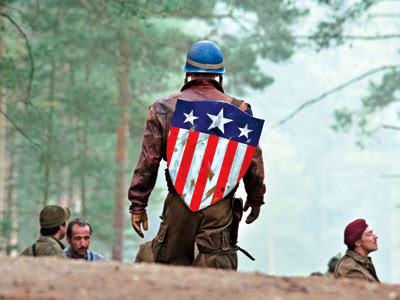 Cap heads into battle with his early shield (the round one comes later, as will the chainmail costume, presumably). 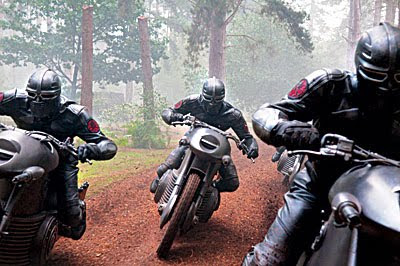 The hideous Hydra; apparently the Red Skull will have a splinter group in the Nazi Germany leadership. Lots of agents for Cap to bounce his shield off.

Well, at the very least it looks better than the previous Captain America movie. And hey, it can't be worse than the Fantastic Four, which I paid to see.
Posted by Christopher R Taylor at 9:22 AM