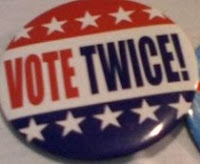 Here in Oregon we vote by mail, everyone, every election. I hate it, because I loved going to the polling place in person, it made me feel like a citizen doing his part in an election, not some guy at home filling out a survey. And I cannot help but suspect that my votes aren't being counted as scrupulously as they might be; certainly the potential for fraud and intimidation in voting is immense with the all-mail system.

The GOP is sending lawyers to watch the counting process, but can you trust lawyers? That kind of thing strikes me more as a stunt than anything else. Still, when you look around the country you have to wonder if there isn't something basically wrong with the election system based on the fraud stories that flood out this time of year.

For example, in Nevada, there are reports of half a dozen people complaining at a polling booth that when they went to fill out their ballot Harry Reid's name was already checked for Senatorial candidate. True or not? Its hard to say, but that's something that is troubling, to say the least.

In Pennsylvania, Robert Brady (D-PA) admitted that his party machine still has "walking around money" to pay people to vote. Maybe he misunderstood the question, maybe he meant something different but didn't express it well, or maybe its just another big city corrupt political machine.

In Colorado, an offshoot of the SEIU was caught with 6,000 fake voter registrations. In Arizona, 3000 questionable registrations were discovered in one district, handled by the office of one of the candidates for congress there. Within hours of this being announced in the news, Representative Grijalva's office (D-AZ) supposedly was mailed a package covered with swastikas and containing suspicious white powder. How this allegedly got through the mail system is something people are looking into.

Florida police seized a commissioner's office for having almost 100 fake absentee ballots filled out and ready to be "discovered" if the vote was close but the Democrat wasn't winning. Hey it worked in Washington State and Minnesota, why not Florida?

In New York, five Democrat councilmen have been checked for DNA to test it against absentee ballots and applications that were filled out and appear to be fake and done by the same group of people.

In Ohio, the school district took three van loads of high school students to a location and given ballots so they could vote. One problem: all the ballots were Democrat-only.

Not content to defraud the election through tricks, Portland Maine is considering letting non-citizens vote. They think its unfair that citizens can't vote; I consider it proper and an encouragement to become a citizen. This is the problem with considering voting a right. Its a privilege, in my opinion.

If people can't trust the vote, that's the death of democracy. Period. Winning isn't worth that.
Posted by Christopher R Taylor at 8:50 AM

When it comes to that, then it's bullets, not ballots next.

NC had trouble with machines in New Bern; people voting the straight R tickets found the entire ballot marked D.
They caught it and cleared, remarked and the same thing happened. Complaints finally got it fixed. How many slipped through?

Get ready for the fix.