"Regardless of what happens to me in the future, it all can be placed on what you have done and, believe me, I appreciate it." 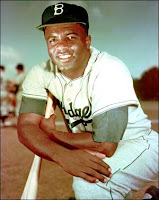 Jackie Robinson is one of the greatest baseball players in the history of the game. Most people know him as being the first official black player in Major League. Real baseball fans know him to be a premier player, one of the best that ever put on a uniform, and a genuine class act. Jackie Robinson was a "four tools" kind of player; he was a very fine fielder, he had real speed, great batting average, and genuine power. In his second year of baseball he was voted MVP and was voted an all-star by the fans.

Jackie Robinson's first year was especially rough. Some of his own team mates didn't want to play with a black man, and they were told by manager Leo Durocher "I do not care if the guy is yellow or black, or if he has stripes like a f**kin' zebra. I'm the manager of this team, and I say he plays. What's more, I say he can make us all rich. And if any of you cannot use the money, I will see that you are all traded."

A group of St Louis Cardinals players threatened to strike if Robinson played, but backed down when Commissioner Chandler made an official statement that any striking players would be suspended. During play, racial epithets were hurled at Robinson from the crowd, and he was spiked and bashed around in collisions on base, once receiving a seven-inch gash in his leg. One particular game between the Dodgers and the Phillies was so brutal, led by the Phillies manager, that it actually served to solidify the team around Robinson because the other players viewed it as an attack on all of them.

Through it all, Robinson displayed a characteristic which he became famous for. He was calm, focused, and dedicated to playing baseball. He didn't retaliate, he didn't get angry - outside at least - and he didn't shout at the other players. He did so for one main reason. Branch Rickey saw the phenomenal players in the Negro Leagues and wanted to get those guys into Major League ball. He chose Jackie to start this wave off with because, as he told Robinson "I need a player who has the courage to not fight back." Rickey understood that a combative and angry black player would only encourage the hatred and opposition, and would fuel arguments that they shouldn't be in baseball.
Jackie Robinson stood against a wave of opposition and cruelty, and it broke against him. The year following Robinson's addition to the Dodgers, another teams had extraordinary black players (Larry Doby and Satchel Paige on the Cleveland Indians), and by 1959, every team had at least one black player. Robinson's calm response to the racism and his keen skills on the field silenced critics and showed the way for the rest who followed after him. Jackie Robinson was strong and talented, and for this every single team in baseball has retired his number, celebrating his career every year.

I can't help but think of the stark contrast between Jackie Robinson and President Obama. President Obama is the first (mostly) black president, a man who has broken a color barrier of sorts at the political level. President Obama is viewed by many blacks in the same way as Robinson, a trail blazer who represents all blacks in his office, and he enjoys very strong support to this day among blacks, according to polls.

Robinson was very good at what he did, and he did it stalwartly without bitterness, rancor, or retaliation. By contrast, President Obama seems hapless in his work, unable to understand his job or how to carry it out. He responds poorly to crises, he shows poor leadership skills, and when opposed he responds with swift and often angry attacks.

Today’s American society has obliterated all official and institutionalized racism against blacks and culture shuns and is repelled by any such behavior. Unlike in Jackie Robinson’s day when he had to endure racial hatred from his own team mates, President Obama faces very little of that sort of racism except from isolated, rare extreme idiots. That doesn’t stop him and his defenders from shouting racism at every opportunity, even when there’s no evidence of any such behavior.

When President Obama is questioned or someone disagrees, the cries of racism shower down from on high like fists meant to crush any dissent, once called the "highest form of patriotism" by the very ones who now oppose it.

Had President Obama been an experienced, capable leader ready for the position of president and a man of greater restraint and calm reassurance, he could have been another Jackie Robinson. Even if I disagreed with his political positions, I would have been far more admiring of Barack Obama if he was even mediocre at his job. As it stands, he's the opposite of Jackie Robinson which in the end I fear hurts the cause of black Americans far more than it helps.
Posted by Christopher R Taylor at 8:42 AM