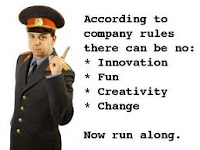 Quick question: what never changes in Washington DC, no matter what party is in charge or what political winds sweep the lands? What's a fixture between administrations, regardless of who is in power?

The bureaucracy. The drones that do the busy work, the people who type things up and make day to day decisions about minor things. The people in agencies who make the small decisions and carry out the tasks based on their own ideas of how things should be. One of President Bush's biggest errors was to not clear out the heads of agencies and replace them with people who'd work with him rather than against him. He paid a pretty high price for that.

These guys work at Washington DC on and on, running things behind the scenes with no public accountability and their own agenda which they are able to apply regardless of leadership and political party. These Washington Insiders are the staffers for congressmen, the workers in agencies, the pencil pushers and the gofers who get the work done but bear none of the burden of failure or responsibility. Union workers, they're very difficult to get rid of and can weasel their way out of any restrictions to get things done their way regardless of the order they get.

Hogan at Redstate points out that the bureaucrats and drones are looking at the new flood of Tea Party Republicans and independents and shrugging. Why? Because they're the ones who actually get things done. Congressmen don't write bills, staffers do. Congressmen don't deal with the public, staffers do. Staffers even come up with the ideas and speeches many congressmen offer up. They are the ones who convinced John McCain and Russ Feingold to pass their campaign finance bill. They're the ones who came up with the Community Reinvestment Act. Staffers and drones who are eternal and simply shift around between positions.

And if you're an establishment politician, you like it that way. Its comfortable, it works, its easy. So how do you get the newcomers to toe the line? Hogan writes:

So, expecting to pick up a number of seats by “newbies,” what do GOP leaders in Washington want to ensure? They want “GOP insiders to staff outsiders,” according to Roll Call. Eric Cantor’s staff added, “There’s a lot of important work to get done right out of the gate, so it’s important that newly elected Republicans have access to experienced, competent staff so that they can hit the ground running.”

According to Roll Call, “[a] Republican aide confirmed leadership’s interest in having staff that works well with Boehner to move the agenda forward.” And even better, the lobbyists and strategists are in on the act, as well - one lobbyist saying, “[y]ou want to be sure that the newbies, when they hit town, do not necessarily bring their campaign staff to run their Congressional offices, because in some cases they are totally ill-equipped.”

That's right, you weigh them down with beltway insiders and bureaucrats. Sure, these guys are often neophytes at the work and some experience would help, but not much experience, because the experience that we've had in congress for decades quite frankly sucks. I'd rather people be hapless and incompetent than corrupt, entrenched, and the same as we've had before.

These guys stay in position doing their thing regardless of who is in power, and that's got to change too. There are plenty of people looking for work. There are plenty of overpaid people in Washington right now getting absurdly overvalued benefit and pension plans. Congress can fix this all with three moves:
Sure things would be kind of a mess for a while but does anyone seriously think that it would be much worse than the incompetence, corruption, and sloth presently in place? If you really want change, this has to happen. The present government is too big, too expensive, and too entrenched to serve the people. It has to change bottom to top, not just with congressmen.
Posted by Christopher R Taylor at 9:05 AM