"There doesn't seem to be any difference based on the cause of the rally. So rallies to save the planet and end pollution generate as much trash as rallies for more free money."
-UFKA_Smithwick
So the Unions and other socialist groups gathered in Washington DC to have a rally, attempting to refute and counter the gigantic Glen Beck rally on September 28. They offered free bus rides to people, they advertised through their helpful leftist media buddies, and they had unions pressuring people to go. The crowds were really sparse and not too many people showed up, although they had plenty of pre-printed specially made signs and shirts for people to display.

Yet it wasn't the size or enthusiasm of the crowd which really makes the statement; the left is kind of on the wane in terms of popularity right now, and lacking enthusiasm. No, it was what they left behind: 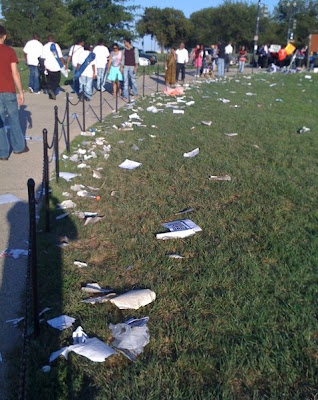 These are just a few images of the left's efforts to save the planet from pollution from Big Journalism, Marooned in Marin, and Don Surber. Seriously, every time these leftists have a rally they trash the place, leaving behind junk that others have to clean up. The Tea Party rallies by contrast leave the place pristine. Why? Its a different mindset entirely.
The contrast between Tea Party and leftist rallies isn't primarily political. They don't just disagree on issues, they disagree on worldview which results in a difference of viewpoint on issues. And this distinction of worldviews has a lot of repercussions beyond policy stances. Sure, you can rely on the usual big/small government more/less taxes capitalism/socialism divide, those are predictable. But there's a lot more going on than that.

This worldview divide is why the Tea Party picks up after its self and the leftists don't. Every individual varies and some are exceptions to the basic pattern but you can see a pretty consistent contrast between the left and right. Tea Partiers consider themselves responsible for what they do and how they act, leftists think others are responsible. The right thinks its up to us to get things done, the left thinks its up to specially hired and trained government officials. The right thinks they have to make their own way, the left thinks that everyone should be helped along by the powers of government. Thus: right picks up after its self, feeling responsible for what's left behind... left doesn't.

There are other contrasts you can see between left and right:

After being shamed so many times, you'd think these guys would learn their lesson but they just don't ever seem to. They are starting to figure out that having carefully premade signs just makes them look like a corporation, so some are carrying hand-made ones.

The trash is a symptom, the politics are a result, but the underlying worldview of the right vs the left is what makes the difference. And until that worldview can be changed across the nation, the divide will always be there, no matter what temporary shifts there might be in politics. The culture and its primary ethical and philosophical influences have to change. Who is in office or what party wins what race really doesn't mean much until that happens.
Posted by Christopher R Taylor at 9:00 AM

Maybe we need a League of Organizations That Clean Up After Themselves.

I would nominate the Tea Party, the Experimental Aircraft Association, and the National Rifle Association to get things started. The common theme is responsible grown ups.

It looks like the debris left by a retreating army.