"So, the hippies of 1968 didn’t particularly like either major political party, but they showed a particular anger toward the Democrats for screwing everything up — while giving the Republicans a shrug."
When I wrote my "counterculture" essay in 2007, I was primarily motivated by an examination of the society around me and a reaction to how the secular left had come to dominate nearly every cultural sector. With that being true, being Christian and Conservative makes one necessarily counter-cultural, offering an outsider's view of how to do things in opposition to the conventional wisdom of the day.

I noted in that essay that many of the ideas of the Hippie movement of the 60s were, in fact, noble and reasonable:

The counterculture sought to do two things: first, reject hypocrisy and corruption in the old culture, which was a real thing. The old culture had a church that taught love and acceptance, but parishioners who practiced bigotry and racism. The old culture loved mom and revered women, but too often treated them as helpless twits. The old culture praised hard work and business, but let business abuse their environment and workers with a wink. The old culture's faith considered the world to be a gift from God to be stewards of, but in practice treated the planet as a meal to be devoured and cast aside.

The second thing the movement wanted to do was normalize behavior previously considered improper or shameful (extramarital sex, misuse of drugs, etc). What I missed in this analysis was something that Zombie wrote about in a recent article in Pajamas Media in which she posts the usual libertarian two-axis political graph and on it placed titles. Two of them show up in a place which seems completely contradictory, but which she insisted was reasonable - Hippies and the Tea Party: 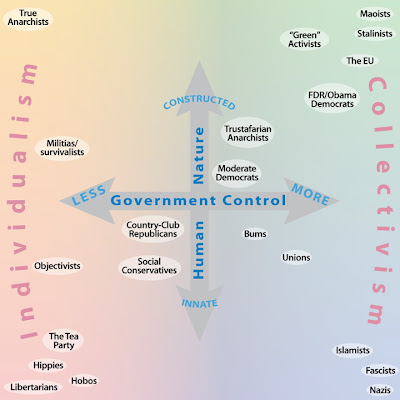 How do Hippies and the Tea Party fit together on this chart? Well first you have to understand she's talking about the original, pure Hippie movement, before it became diluted by trust fund kids raised as communists or filled with the ideas of Marx and Mao. She's referring to the original movement (as I was) that was born not of leftist indoctrination but a yearning for freedom and individual liberty. Zombie explains:

You might be thinking, “But wait — Tea Partiers don’t take LSD or wear long hair or practice free love or dance barefoot in Golden Gate Park. So they’re not really like the hippies at all.” Yes, all that may be true, but those surface cultural details are not the point; the underlying philosophy inspiring both movements is the point. Don’t confuse the form that a movement takes with the inspiration behind it. For example, the Gold Rush of 1849 and the dot-com boom of the 1990s manifested in completely dissimilar cultural contexts, but the underlying financial excitement was exactly the same. The same is true of the Tea Party and the hippie movement. Actually, considering that the Tea Party demographic skews toward people in their 50s and 60s, it may very well be that many Tea Partiers did wear long hair and practice free love 40 years ago when they were young. In other words, a certain percentage of Tea Partiers aren’t simply like the original hippies — they were the original hippies, but in the intervening decades have grown less ostentatious and these days express their anti-authoritarian urges in a more culturally conventional manner, now that adolescence has worn off.

I'd say less culturally conventional than mature and more interested in truth and ideas than emotion and appearance. The Hippie movement was intensely adolescent and rebellious, while the Tea Party movement is much more adult and concerned with future, the nation around them, and their children. Yet behind both, as Zombie points out, there's an essentially independent, liberty-loving core conviction.

Libertarians prefer to consider the Tea Party movement their baby, an essentially libertarian concept, but the truth is, it isn't wedded to libertarians or conservatives, its not really political at all. It has political aspects, but the Tea Party is like the Hippie movement: it is essentially cultural. This is a movement which is pushing for the entire social fabric of the country to change, from education to entertainment to business to government and beyond. If you attend any Tea Party rally you'll see that in the signs, the discussion of the crowd, and even the speeches by the speakers. The elections aren't enough, this isn't about just getting guys in office, its about a basic sea change in American culture.

Hippies managed to ride that cultural wave at the forefront and were iconic in the countercultural revolution of the 60s. Guess what; the Tea Party seems to be occupying the same place in the 2010's. Will it continue or will November mark the loss of momentum? Time will tell, but there's a few secrets here which might confound you if you lean left.

Proto Hippie and beat icon Jack Kerouac was a conservative. He really was, as PJ Gladnick notes at Newsbusters):

Writing in the Chicago Tribune on Sept. 28, 1969 -- less than a month before he died -- Kerouac was emphatic: "I'm not ... a hippie." He had little sympathy for those "hippie flower children out in the park with their peanut butter sandwiches and their live-and-let-live philosophy." And he denied any claim to being the "intellectual forebear who spawned a deluge of alienated radicals, war protestors, dropouts, hippies, and even 'beats.'"

He wanted no part of it. What he did claim, in his journals and on television interviews, was an abiding faith in Catholicism, laissez-faire capitalism, and the political gospel of William F. Buckley.

At the height of the counterculture, Kerouac declared: "Listen, my politics haven't changed, and I haven't changed! I'm solidly behind Bill Buckley, if you want to know. Nothing I wrote in my books," he confessed in a 1968 interview, "nothing could be seen as basically in disagreement with this."

The truth is, Kerouac's beat philosophy was of individualism, rejection of government control, rejection of nanny state big government, and rejection of the left's socialist dreams. And it makes sense, if you look at what he had to say and stood for. He wasn't for greater social awareness and more government programs to make people do right, he was for people getting off his back, leaving him free to live and learn and love, and for the liberty to be himself without interference. That's about as right wing as you can get.But if you go carrying pictures of chairman Mao,

You ain't going to make it with anyone anyhow
-The Beatles, "Revolution Number 1"

And that brings us to the modern neo-hippie movement. Think about this a moment: every modern leftist movement is almost diametrically opposite the Hippie movement on that chart. Greens, faux anarchists, marxists, Obama Democrats, etc all in the top right, not the bottom left. You know why? Because they've abandoned the ideals of liberty, self reliance, and individualism for collectivism, government programs and social planning, and socialism. The entire movement was coopted by radical leftists and in effect destroyed. The hippie of the mid 1960s would be in deep disagreement with the modern tie dye shirt wearing dredlocked Maoist.

The modern "Hippie" wants more government power over their lives. The original Hippie just wanted to be left alone to do whatever they wanted. Leftist radicals like Ayers, Alinsky, Hayden, and others rose as large voices in the movement and the movement turned from a peaceful desire for liberty to a violent desire for greater power. The modern "Hippie" betrays everything those original ones believed in, except perhaps a desire to get stoned and not be drafted.

Take another look at that chart and you'll see something conservatives have been trying to say for years. On the right hand side, under more government, you'll find both Communists and Nazis. Guess what: Fascists aren't right wing extremists. They just aren't. Faux "trustafarian" anarchists (rich kids pretending to reject their wealth) of modern black bloc variety are on that side too: they don't really want less government, they want more, when it comes down to their actual answers and what they'd like to see happen (did you think it was some weird mistake they carry red flags around?). All these guys fall on the side of collectivism: the idea that power should be put under the head of some great central government and everyone should march according to that plan.

The real split between communists and fascists is that Communists figured by plan and scheme they could fix the world and make everything better, and Nazis figured that they had to eliminate the ones who'd never get any better and evolutionary process would produce superior men through proper breeding. But both believed in big government and centrally planned economies.

Finally see where true anarchists show up? They think that the world can only be saved by utterly destroying all government and then through that people will become more free and better by being reduced to their core selves, unprotected from the world by the fences of police and law. These are Rousseauians, in essence, people who believe that humans are corrupted by culture and civilization, and that if we tear it all down, people can rebuild a better world. And they're on the opposite side from both false anarchists and fascists. As I've noted before: the real radical right wingers are true anarchists, the bomb-flinging 19th century kind.

Social Conservatives don't belong as far down as Libertarians who believe that people are completely immutable and essentially selfish and that no government control whatsoever on humanity is good, but her positioning betrays a prejudice toward the movement. Social conservatism isn't what brought us drug laws and laws against prostitution, it wasn't what gave us prohibition. The people who were behind that were largely Christian, but they were also largely leftist and still are today. They also pushed for welfare and social security, they loved FDR's policies and were strong in his government. They were not like modern conservative Christians.

So her understanding is a bit confused - Social Conservatism is much less about laws to make people stop doing bad things than opposing the slide of culture continuously toward the drain. Conservative Christians are more about not having new laws these days (or at least, not eliminating existing laws) than having more new ones.

In the end, it is funny what she notes. Many of those Hippies who took to the streets decades ago are doing so again and they're fighting for many of the same things they did so long ago. The big difference is that they've grown up enough to realize that the leftists they listened to and loved were traitors to the cause, not visionaries. The even bigger difference is that this time around, the media is hostile and burying the story rather than sympathetic and overplaying it.

The new counterculture is rising, and the existing culture hates, fears, and is working to stop it by almost exactly the same measures as the old culture did against the Hippies. God save us from another Kent State... or did we see that at Ruby Ridge, already?
Posted by Christopher R Taylor at 9:54 AM