"I do know it’s easier to think of me simply as the guy who wrote ‘The A-Team,’ so they do." 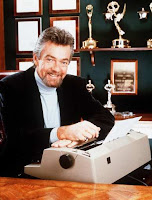 Last week, Stephen J Cannell died, and I have to give him a bit of a eulogy here. I know nothing about the man personally or his habits, I don't know if he was a rogue or a saint, but his legacy of television shows is impossible to ignore. He also was a mystery writer, although I've not read any of the books to give an opinion on them.

Cannell's first work was a writer on episodes of Ironside, and he followed up with such popular shows as Adam 12 and Columbo. His first show that was picked up by a network was The Rockford Files which had his typical touch of a whacky group of distinctive characters, gritty backgrounds which peeked out on occasion, and regular doses of action and romance. Shows such as NCIS follow this template to this day. He followed up on this with Baretta, Black Sheep Squadron, The Greatest American Hero, The A-Team, Wiseguy, 21 Jump Street, The Commish, Hardcastle And McCormick, Riptide, and Silk Stalkings.

Overall, Stephen Cannell wrote more than 450 episodes of television and produced or directed more than 1,500 in addition to his 17 full length novels. That's a pretty productive writer by anyone's standards.

As a writer, Cannell was involved in most crime and mystery dramas written in the 70's and 80's and created dozens of other shows that never made it very far such as Stingray, Cobra, and Renegade. Cannell, like me, saw his work as a writer not as some grand artistic effort but as a craft similar to blacksmithing or leatherworking: a job involving specific skill and talent, but not some elite calling. He didn't get paid much for his writing but he found a way to make a living anyway, according to a 2002 interview quoted in Celebrity Deaths:

I signed a deal as a head writer to make $600 a week. I was the cheapest writer on the lot. It was the lowest deal you could do by Writers Guild standards. But I'd been working for my dad for $7000 a year. I was at Universal for eight years and I never renegotiated my deal but once. It was late in my arrangement with Universal. There was one thing in my deal that my agent had managed to get in there — I had good fees for my pilots. The reason they did it is that they never thought I was going to write a pilot. So they'd give me $70,000 to write a two-hour pilot and a $100,000 production bonus if it ever got made. Then I became the hottest pilot writer at Universal. I was writing two or three pilots a season. I was making $400,000 a year in pilot fees.

He cranked them out and a lot of them took hold and made a lot of money for the networks. I remember his shows well, and watched a lot of them. Some were pretty awful (Riptide, Greatest American Hero) and some were brilliant (Rockford and Wiseguy). But all of them showed a real love of writing and mystery and the range showed a creative mind able to reach beyond the usual television boundaries to create a pattern people still follow decades after his first series.
Posted by Christopher R Taylor at 8:49 AM