THE SKY ISN'T FALLING ANY LONGER

"I hardly know where to begin in terms of commentary on this difference. "
When Michael "piltdown" Mann came up with his now-infamous "hockey stick graph" he left off a lot of data which makes the picture look a lot less dire and interferes with the "humans are killing the planet" narrative. Here's the original graph:

Here's what the graph looks like with the data Mann left out properly depicted: 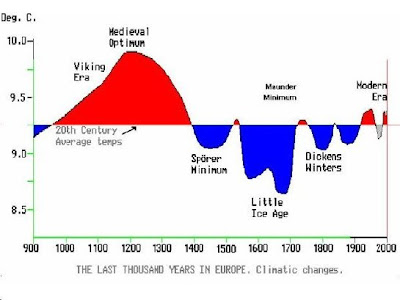 That's a lot less dramatic, in fact it looks a lot like there's a regular pattern of warming and cooling periods. In fact, when you go back further, you see a great deal of even more significant warming and cooling going on, so there's radical swings back and forth from warm to cool and back: 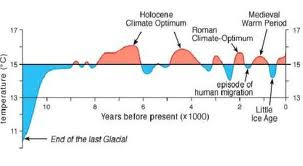 So why did he leave this other data out? Well when confronted on it, he stonewalled and attacked, then finally came up with the line that alarmists have been using ever since: those warming periods were isolated and regional not world wide. You'll see that come up once in a while on the internet, even from some pretty prestigious voices. Are they right?
The problem is, the data for the warming periods such as the medieval and roman warming periods is just as well established world wide as the data Mann cherry picked to show a fairly flat period of global temperature until very recently on the top graph. Australia, America, New Zealand, and Antarctica all demonstrate that the era was in fact warmer in addition to mountains of evidence from Europe.

Just recently, another piece of the puzzle was added, demonstrating the warming period took place in Japan as well. Data taken from cherry tree rings from the 800s to 1300s shows warming and higher CO2 levels in Japan as well.

Last year, "Piltdown" finally admitted that the medieval warming period was in fact global, but tried to show that it was not as much as modern warming, despite evidence that it absolutely was warmer. The problem for Mann is that if he admits that just a thousand years ago it was actually warmer, before SUVs and factories, his whole funding machine is in danger because it isn't true that men caused these (greater) warming periods and the whole cyclical/solar driven climate change theory becomes much more reasonable than the "my car is killing the planet" alarmist ones.

As I wrote about last year, "Piltdown" Mann created the graph by cherry picking samples, choosing only those that supported his story and ignoring others which caused problems with it. In other words, he lied. When you use all the data and merge it into a single coherent graph you get this, with the green line being the merged data (red is Mann's graph, and black the data he ignored: 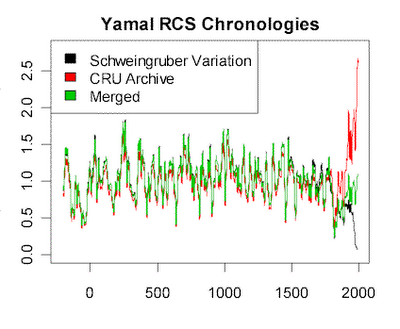 Meanwhile, the Queensland government, eager to show the dangers of climate change and the terrifying rise of the oceans, finished a 19 year study of the tides off the coast of Australia. Their findings? The ocean rose .3 millimeters a year on average. That means in a century it will rise 3 centimeters - that's just over an inch - presuming the rate continues. Given the cooling we're now experiencing, if anything happens to the ocean, its more likely to lower than rise.

And finally, the UN has announced that the Ozone layer depletion has ended. You remember ozone, right? That was the big ogre during the 80's; the ozone layer was disappearing, there was a hole over Antarctical we're all going to fry!! As it turned out the ozone hole was actually an oscillating affair that wasn't new, and its pretty much gone now. The AFP report congratulates efforts to get rid of aerosol spray cans and old (more effective) air conditioning:

The protective ozone layer in the earth's upper atmosphere has stopped thinning and should largely be restored by mid century thanks to a ban on harmful chemicals, UN scientists said on Thursday.

The "Scientific Assessment of Ozone Depletion 2010" report said a 1987 international treaty that phased out chlorofluorocarbons (CFC) -- substances used in refrigerators, aerosol sprays and some packing foams --- had been successful.

We were all saved by the environmentalists! Except later on in the article is this line:

However, the ozone-friendly substances that have replaced CFCs in plastics or as refrigerants - hydrochlorofluorocarbons (HCFCs) and hydrofluorocarbons (HFCs) -- are also powerful greenhouse gases.

HFCs alone are regarded as 14,000 times more powerful than carbon dioxide (CO2), which is the focus of international efforts to tackle climate change, and HFC emissions are growing by eight percent a year, according to UN agencies.

So we're still all doomed. Nowhere is any mention of the effect of solar activity on the atmosphere and what the change in sun spot activity has as influence on the ozone layer. Which begs the question is the ban on CFCs and the ozone layer loss ending causal, or coincidental? Did the ban save the ozone layer, or did it just happen at the same time the ozone layer changed?

Since nobody seems interested or willing to do a study, we don't know, but the UN is declaring the ban to be the successful cause despite the lack of any real lack of study on the topic.
Posted by Christopher R Taylor at 9:35 AM