“It is time to hold them accountable for what they are trying to promulgate with rules and regulations.” 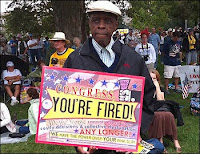 When Democrats took a supermajority in the Senate and a huge majority in the House of Representatives in the United States as well as the presidency, they were elated. They also assumed some things about the election which were utterly without merit or reason.

Based on these presumptions, they went nuts. They rammed through one huge bill after another, treating any opposition as a tiny fringe drummed up by desperate Republicans; radicals of such tiny numbers they could be safely ignored.

Now, poised on the brink of a massive reversal, Republicans salivate at the prospect of regaining power in congress. A tidal wave of Democratic Party defeats seems inevitable, and Republicans are already starting to plan. But are these plans based on reality, do they really understand what's happening here? There are signs they do not.

Republicans will have President Barack Obama’s czars and his use of regulatory powers to circumvent congressional inaction on issues such as cap and trade in GOP crosshairs if the party takes control in January.
...
“When the Republicans are in charge, you will see the oversight subcommittee of the Energy and Commerce Committee active on a whole host of fronts,” said Rep. Fred Upton, Michigan Republican, who likely would chair the subcommittee if the Republicans take control of Congress. “How are these [czars] funded? So whether it be the authorizing committees and appropriations committees in terms of deleting the funds for those, I think you could go after it in one of two different ways.
...
“We need to go line by line, page by page through the line items they happen to fund,” Upton said. “For a lot of these programs, I’m not sure they were authorized [by Congress], so how is it we are spending money for them?

“We are going to be focusing like a laser beam on overreaching by the regulators.”

In one sense, its good to look at the excessive actions by branches of the Executive Department like the FDA and others; I've written about several extremely idiotic things they're doing. Certainly I'd love to see the out of control Czar system President Obama is using be put under the magnifying glass because I have no doubt they're at least stretching laws if not breaking them.

The problem is, that's not why people are so enraged at Democrats. Sure, the plethora of Czars and weird regulations annoy people, and conservatives such as myself especially are very upset at what the Obama administration is doing. But guys like me don't represent a majority of voters in the US. Most voter are largely apolitical, don't pay much attention to the news or what's happening, and aren't very aware of what the FDA is doing to farmers.

The Czars and what nonsense they're getting up to is not the primary concern, or even on a list of concerns most voters would even bring up. If you told them all about it and why it mattered, they might add it to the list but that's not what they're upset about.

They are unhappy that we have a crappy economy and the federal government keeps spending insanely more money. They're mad that congress isn't just ignoring their concerns but openly mocking and attacking people who dare question them. They're mad that they lost their house but Citibank got a massive bailout to stay in business - a bailout which few people believe was even needed to begin with. People are mad at an overspending, over reaching congress which seems to be wracked with corruption and so in bed with huge corporations that they cannot be trusted with the slightest spending. Obama's Czars aren't what people are taking to the streets about, not most of them.

Republicans face the danger of doing the same stupid thing the Democrats did: being distracted by their power and the most radical voices in the party to focus on things the nation doesn't care much about. I'm all for what they talk about doing here... but the primary focus for a theoretical Republican Majority should be on three things:
Now, if they can sell the Czar problem and the regulatory overreach of the various agencies in the federal government as number 3, then that's great; they might make people happy. But they can't go off on a series of investigations and hearings, because all that will do is make people very upset at the time wasted and failure to do what they were elected to do.
Posted by Christopher R Taylor at 11:53 AM